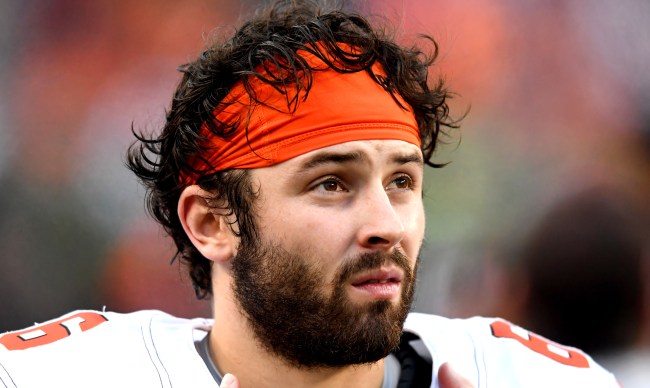 A couple of weeks ago a photo of Cleveland Browns quarterback Baker Mayfield along with four other NFL players hanging out shirtless on the water surfaced on the internet and made the 24-year-old Mayfield look like he’s the only one in the pic who is not a professional athlete.

Check it out. Doesn’t it look like Mayfield is just a random guy who accidentally wandered into the background just as a photo was being taken of four NFL players?

Next year he’s going to be “swim with your shirt on” guy.

In Mayfield’s defense, I presented this photo…

Over the weekend, however, someone with a little more swag than myself also jumped to Mayfield’s defense: Giants running back Saquon Barkley, who along with Sterling Shepard and other players appeared in the photo.

“He’s a quarterback, he’s not supposed to be shredded,” said Barkley when asked about the pic.

“We in off-season, he’s gonna have time to get his body right. He can throw the ball 80 yards. That’s the only thing that matters.”

LOL… the offseason literally just started. That’s not exactly a great excuse, but yeah, all that matters is how Mayfield throws the ball – as long as it’s being thrown to the right team, which was a problem in 2019 for the 2017 Heisman Trophy winner.

“Playing against him for the last two years, you see the type of competitor he is,” Van Pelt said in a news release. “The type of player he is on the field, loves the game, plays it with passion, those are all the things you’re looking for in a great player.”

So he’s got that going for him, which is nice.

Man, didn’t know how close I was to having a professional athlete’s body.