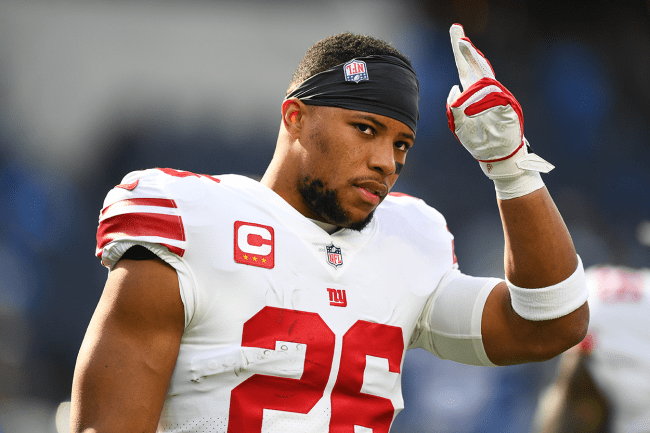 With the No. 7 overall pick in the 2022 NFL Draft, the Giants decided to improve its abysmal offensive line. To do so, New York selected offensive tackle Evan Neal out of the University of Alabama.

Despite his monstrous frame, he doesn’t look like he is as big as he is. Neal is absolutely shredded and couldn’t be in better shape for someone his size.

That doesn’t mean he isn’t still a large human.

In fact, when most people encounter Neal, they are taken back by his presence. Even starting running backs in the NFL.

By drafting Neal, the Giants did their offense a huge service. Obviously, it’s hard to find success running or throwing the ball if there is not a line to open holes or provide protection in the picket.

“I’m excited especially selfishly as a running back, when you get a 6-7, 350-pound lineman helping you out,” the fifth-year running back said. “But not just for myself, the quarterback, too, and our offense in general.”

When Barkley first met Neal during a pre-draft visit, he was hopeful that New York would be able to draft him.

As for his initial reaction to Neal’s size, Barkley was astonished.

“Evan Neal, he’s a physical specimen,” Barkley said.. “He came for the draft top 30 visit. All the draft people kinda were by my locker. He was there and I was like, oh my God, who is that?”

Needless to say, the star running back is thrilled to have Neal blocking for him up front. It’s hard to count on one player making a difference, but Barkley’s ability to run behind his new rookie teammate should help, at least a little bit, right?