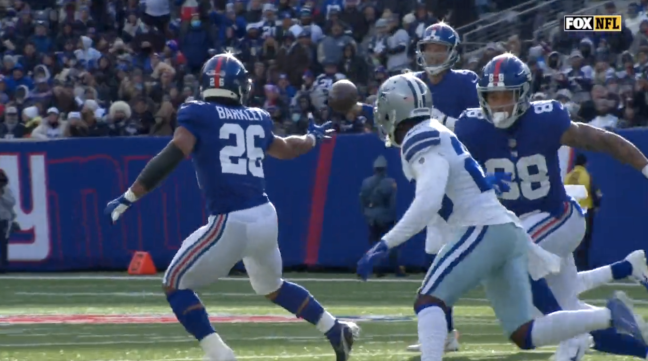 Saquon Barkley has dealt with injuries on and off over the course of his young career and hasn’t quite panned out like New York had hoped thus far. However, he continues to show flashes of greatness and made one of the craziest catches that you’ll ever see on Sunday.

It wasn’t like Barkley mossed somebody or made an insane diving grab, but it will blow your mind just the same.

Late in the first quarter, the Giants faced 3th-and-1 inside the red zone. Quarterback Mike Glennon ran the play-action and was immediately overwhelmed by the Dallas pass rush. To try and bail himself out, he looked to his right and found Saquon in the flat for the check down.

Glennon dumped it off as the defender closed in but left the pass a little bit behind Barkley. Not to worry.

Barkley, who must have stick-um on his hands, reached back and made a crazy one-handed catch. It made no sense.

He literally grabbed the nose of the football, wrapped his fingers around the tip. Take a look:

This angle might best illustrate just how insane it was. Barkley had no business making the catch. The ball was under thrown — to no real fault of Glennon’s, who was about to get popped — and it should have fallen to the turf for an incompletion.

Instead, Barkley defied physics, made the catch, turned up field and got the first down. It was the greatest one-yard play of the season.