Sarah Fuller Makes History After Kicking Off For Vanderbilt Vs Missouri 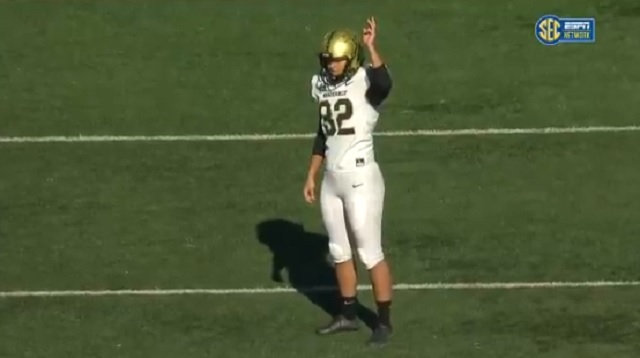 Vanderbilt women’s soccer goalie Sarah Fuller officially became the first woman to play college football for a ‘Power 5’ school on Saturday. Fuller kicked off the second half after she wasn’t given any opportunities to try any field goals or extra points in the first half due to Vandy’s struggles on offense.

Fuller’s kick appeared to be an intestinal squib kick aimed towards the sideline which was recovered by Missouri on their own 35-yard-line.

"Ladies and Gentlemen, you have witnessed history." #PlayLikeAGirl | #AnchorDown pic.twitter.com/Qtcp83lVFI

Fuller got some major props from kicker enthusiast Pat McAfee.

Congrats to @SarahFuller_27 for being THE FIRST EVER WOMAN TO KICKOFF A POWER 5 GAME.

Incredibly rare to be the “1st ever person to do something” these days..this is really cool #ForTheBrand pic.twitter.com/A7vQsAFiM1