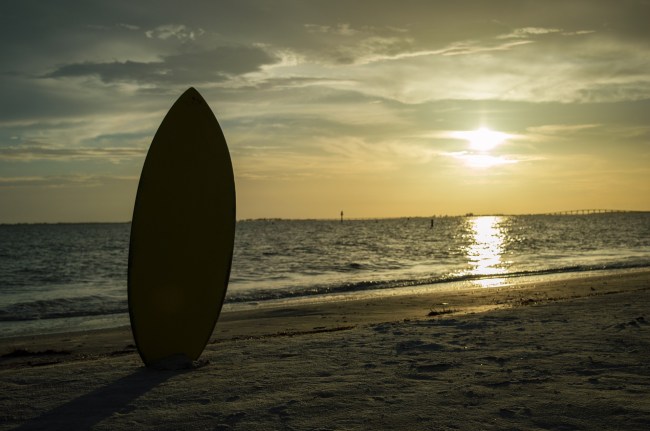 Two YouTubers just changed the river surfing game as we know it. We’re barely into Summer and they’re already dropping innovations that usually happen after bros are stuck at home for months in the Summer.

Essentially, they screwed scooter handlebars onto a skimboard which might seem odd at first but when you see the board in action it all makes sense. Blair Conklin uploaded this video to YouTube this week and the description lays out what led up to this invention.

“This is likely the weirdest video we have posted yet. When @thisismov first approached me with the idea to mount handlebars on a skimboard I immediately laughed. I thought it would be a waste to drill holes in to a perfectly good skimboard. but then I realized that I had a prototype @ExileSkimboards that would be perfect for the idea. The board was made out of a cork material and never went in to production because of durability concerns. It was the perfect board to put to the Scooter Skim test. To take an already bad Idea one step further, I thought the board would actually work pretty well on a river wave. This River Wave is a rare occurrence because it takes very specific conditions to dam naturally by a sand berm that is built by the waves.”

Here’s the Scooter Skim in action (via The Inertia):

The beauty of the Skooter Skim is anyone with a skimboard and scooter can make their own. It might not last forever but that also means it’s an excellent way to repurpose an old skimboard that might be on its last legs.

I’m thinking back to when I was still in school and the Summers would start off so great but by August/September it was hot AF and we’d run out of things to do so we’d start skating behind cars like we were wakeboarding or find new bridges to jump off just to mix things up. This feels a bit like that, an innovation that was borne out of boredom (with skimboarding every day). And instead of my buddy breaking his arm in half and it hanging limp with a bone protruding out of his forearm these dudes are just riding some harmless waves.