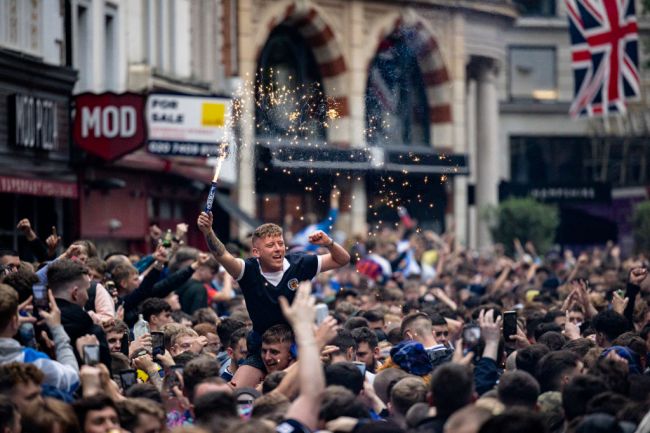 When England and Scotland first played each other in a soccer match, there was uncertainty over fan interest. Both countries did not know if there was any demand amongst their supporters. The match ended up drawing more than 2,000 spectators and sold out the West of Scotland Cricket club on Nov. 30, 1872, setting international soccer’s oldest rivalry in motion.

On Friday, 149 years later, the bordering rival countries faced one another in the Group Stage round of the UEFA European Championships. It was the 115th meeting between the two countries and the first time they had met in a major tournament since 1996.

The match was held on Friday at Wembley Stadium in London and thousands of Scottish fans took over the UK’s capital city. Known as the ‘Tartan Army,’ they started partying before they even arrived in England on Thursday.

Some traveled by plane, others by train.

Thousands of Scotland fans are ‘boogying’ their way to London ahead of Scotland’s #EURO2020 clash against England at Wembley on Friday. This was the scene on the @ABZ_Airport to @Gatwick_Airport @easyJet flight this morning. #SCO #eng #ENGSCO ⚽️
[📱Ruaridh MacVinish] pic.twitter.com/LXzaxmvCx1

🏴󠁧󠁢󠁳󠁣󠁴󠁿 The Tartan Army packing out the train to London today!! pic.twitter.com/3WYBfZUy8y

Here's how the #TartanArmy arrived at Kings Cross. One of those goosebumps moments to film… #EURO2020 #Scotland pic.twitter.com/6EFg4zbzE2

Upon arrival, it was utter mayhem. Hundreds of Scottish supporters descended on Leicester Square and took over the park. They could be seen letting off flares and dancing in the streets into the early hours of the morning.

Scotland Fans do the Conga at @allbarone in Leicester Square pic.twitter.com/moDGVzRzrv

A couple of thousand Scotland fans all around a single police van in Leicester Square. pic.twitter.com/qSQ0tjZJGz

The Scotland fans have found the fountain in Leicester Sqaure #SCO #SCOENG pic.twitter.com/XZsx27pgMg

Meanwhile, Tartan Army members could be seen wearing kilts and playing bagpipes in Hyde Park and near the train station at King’s Cross Square. Pandemonium broke out across the city.

Scotland fans having a great time in Hyde Park

As the afternoon turned to evening and evening turned to night, rain began to fall. That didn’t stop the party.

How are the Scottish fans getting on at Leicester Square? 😂 #ENGSCO #EURO2020 pic.twitter.com/TRaFjAX6oo

The Singing in the Rain continues at Hyde Park at impromptu Scotland fan get together #scotland #fans pic.twitter.com/9bKQt5iNEE

To say that the booze was flowing would be an understatement.

A Scotland fan crossing the road in London tonight… pic.twitter.com/MPjQoAqqRS

Eventually, after hours of celebration, the crowd dissipated. But not for long.

Match day saw the Tartan Army pick right back up where they left off more than eight hours ahead of kickoff.

Scotland fans are slowly taking over Leicester Square and have moved into the area around the fountain. You can’t see them under the trees, but you can hear them! #sco pic.twitter.com/rAWX5IQW1v

Flower of Scotland being sung loudly by hundreds of #SCO fans in Leicester Square. They’ve taken over an entire street and have been chanting since 10am@LBC | @LBCNews pic.twitter.com/L8DsmsyhFV

Who on earth is left in Scotland? Amazing scenes in London's Leicester Square pic.twitter.com/OMU65lsLBF

Leicester Square is absolutely rammed full of Scotland Fans, where is the English Equivalent? pic.twitter.com/4zTdNxsQDA

Despite rain in the forecast all day, the Scottish supporters continued their takeover and made their presence heard.

Rain or shine the Scottish fans have been out in force ahead of England vs Scotland! 🤣#beINEURO2020 #EURO2020 #ENGSCO

Unless you are affiliated with England fandom, it’s hard not to love how Scotland has rallied around its team against one of the EURO 2020 favorites.

Today we are all Scottish. Cheers.