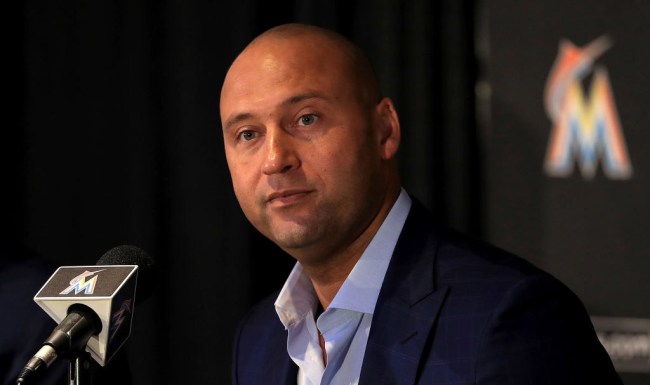 Scott Boras is one of the most successful people in all of sports and he’s never even had to break a sweat on the field. He is the #1 sports agent in every major sport even though he specializes in baseball. He’s amassed a fortune thanks to negotiating the contracts of high-profile clients like Alex Rodriguez, Max Scherzer, José Altuve, Jacoby Ellsbury, Bryce Harper, Stephen Strasburg, etc. etc. etc…

If you’ve been following baseball news recently you already know that Giancarlo Stanton of the Miami Marlins, reigning 2017 NL MVP, was traded to the New York Yankees and the Miami Marlins basically got a few bread crumbs in return. Derek Jeter was only able to purchase the Marlins with other people’s (borrowed) money so it was always assumed the Marlins would have to unload salary pretty quickly, but nobody expected them to trade away the reigning MVP for practically nothing.

Superagent Scott Boras had some things to say about Derek Jeter’s recent (terrible) decisions as the new owner of the Miami Marlins. Boras likened Jeter’s running of the Marlins to someone keeping a pawn shop afloat:

“You would hope that … MLB would screen the ownership so that we have an ownership that comes in and provides additions,” Boras said. Instead, “they come in and they redirect, so you’re not a jewelry store that’s coveting your diamonds, you now become the pawn shop that is trying to pay the rent of the building, rather than focusing on the diamonds and growth that you covet.” (via)

When you have the highest-profile agent in all of baseball calling you a pawn shop owner you know that you’ve royally fucked up.

“Derek may be the first to admit, ‘Hey, I would do some things maybe a little differently,'” Mattingly said. “I don’t know that. But I look back to Derek’s first year in pro ball. He makes 58 errors — 50-something errors — at shortstop, and we know what happened after that.” (via)

I’d have to side with Scott Boras here. I’m no Marlins fan. I’m a Rays fan myself. So I can commiserate with other shitty teams/fan bases in the MLB. What Derek Jeter has done to the Miami Marlins in just a few short weeks/months is a travesty.