Scott Foster, An Accountant Who Had Never Played Pro Hockey, Subbed In As An Emergency Goalie For Blackhawks, Gets 7 Saves 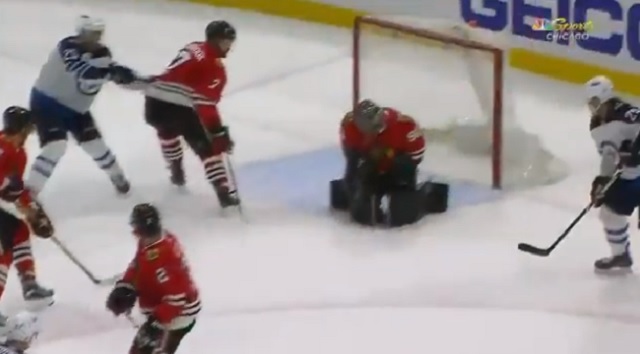 When Chicago Blackhawks rookie goaltender Collin Delia went down with an injury during the third period of Thursday night’s game against the Winnipeg Jets the team was forced to bring an emergency goalie because their starter, Anton Forsberg was also out.

Before the game, a random accountant named Scott Foste, who had a brief stint as a college hockey goalie in the mid-2000s, signed a contract to become the emergency goalie for both teams just hours before puck dropped at the United Center.

The #Blackhawks have signed Scott Foster to an ATO today to serve in an emergency backup role.

The former Western Michigan goalie turned away seven shots in his 14 minutes of action.

EMERGENCY GOALTENDER SCOTT FOSTER FILLS IN AND MAKES HIS FIRST CAREER SAVE! pic.twitter.com/D6CZ7HPfof

After the game, Foster gave a hilarious interview about his unlikely situation

Hilarious post-game interview from 36-year-old Scott Foster, who was called into action as the Blackhawks Emergency Backup Goaltender tonight pic.twitter.com/p4ExOQz8oA

“I think I’m just hitting my prime,” Foster told the Chicago Sun-Times. “The initial shock happened when I had to dress. And then I think you just kind of black out after that.

“I’m an accountant by day. So a few hours ago I was sitting on my computer typing on the 10-key, and now I’m standing in front of you guys just finished 14 and a half minutes of NHL hockey.”

You're a gem, Scott Foster. pic.twitter.com/88J3BP9HD6

Scott Foster ends his NHL career as the perfect goalie with a 1.000 save percentage. Top of the all-time leaderboard baby.