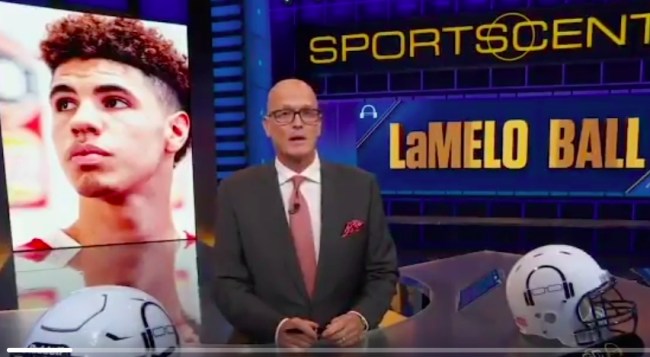 Scott Van Pelt wasn’t alone in his eye-rolling with the media’s over-saturation of LaMelo Ball. Hand up! The ESPN personality often criticized the teenager for playing hero ball and looking genuinely disengaged with his teammates.

But, a recent story on ESPN.com by Jonathan Givony painted the 18-year-old in a light that has either been blissfully ignored by the media or tainted by his father’s circus show. An NBA exec said Tuesday that LaMelo could be the No. 1 pick in the 2020 NBA Draft and praised the youngest Ball for his assimilation into professional ball in Australia and his chemistry with his teammates.

On Tuesday night’s show, Van Pelt issued an apology to LaMelo for overanalyzing the actions of a young teenager thrust into the spotlight by a father who often demands it. It was pretty surreal to listen to a member of the media admit that he was wrong.

"Just seeing the kid, who's looking more and more like a young man, made me look in the mirror and feel really small about how I felt about him."@notthefakeSVP shared how his perception of LaMelo Ball has changed. pic.twitter.com/EDfNhaLmye

I don’t believe you should get a ribbon or credit for saying you were wrong, but a lot of people, particularly in our business, avoid it for whatever reason.

I just want to get out ahead of something where it sure seems like I was. If nothing else, it feels wrong to have been so anti-a teenager, but I was with LaMelo Ball.

The cherry-picking, ball-heisting, 40-foot airball-jacking prop in the family business I found to be really distasteful.

But, I’m an adult. And I should have been able to see it for what it was–he was a kid, in an impossible spot. He was taken out of high school when he should have been at the mall flirting with girls and sent to Lithuania for God’s sake to help pedal his brand and his shoe that his older brother recently told the world was garbage.

I feel badly for him for what was stolen from him, that portion of youth.

Looking at the story on ESPN.com today by Jonathan Givony, I saw the face of a young man who is changing rapidly as we all do at that time of our lives. And as he becomes his own man and takes control of his life, like his older brother Lonzo has, it’ll be compelling to see what he becomes.

In the very early stages of his professional career in Australia, it sounds like he has a chance to go higher in the NBA draft than his brother did, which is saying something. Because there’s only one spot higher than two, and that’s one.

And that’s what an anonymous NBA exec suggested was possible to Givony–“If he keeps this up, I don’t see how there’s any way he isn’t in the conversation for the number one overall pick. He completely changed my perception of the type of prospect he is, and all the background I gathered here from his coaches and teammates paint a very different story about what I thought about him off the court as well.”

That’s not his father saying that on one of the morning television shows. That’s an NBA exec. And I tuned out the carnival barking from his hype man early on. But his father always suggested that the youngest was always the best of the bunch, and perhaps that will prove to be true.

Whatever the case, just seeing the kid, who’s looking more and more like a young man made me look in the mirror and feel really small about how I felt about him. He was a kid, and maybe in the end, he will be the man after all.

Here are the highlights of LaMelo playing good basketball in front of 27 NBA scouts.