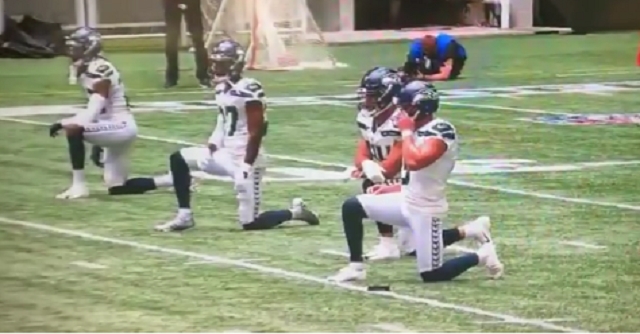 The Seahawks and the Falcons found a unique way on Sunday to honor the Black Lives Matter movement.

Before the game, during the national anthem, only a few players on the Seahawks took a knee in protest of police brutaliy.

Didn't see any Falcons players take a knee during the National Anthem. Quite a few Seahawks players did, including K.J. Wright and Michael Dickson. And 12 Seattle players came onto the field after the anthem was finished playing.

Don’t see any Falcons taking a knee. Few members of Seahawks are pic.twitter.com/D2WLSwOHNX

However, on the opening kickoff every player on the field took a knee and no one moved to observe a moment of silence.

Seahawks and Falcons kicked the ball off and both team took a knee. No one moved. I got the chills.

Something new in the rebellion of players in the NFL:
After the kickoff, all the players on both the Seahawks and the Falcons took a knee.

No one returned the ball, no one gave chase.