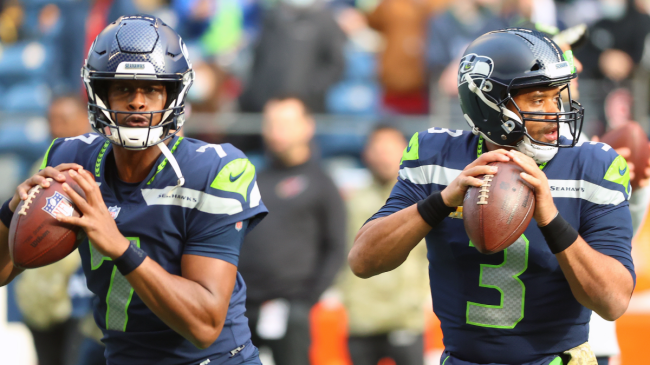 The Seattle Seahawks have been one of the more surprising teams through the NFL’s first four weeks. A team that recently traded star quarterback Russell Wilson is now posting some impressive offensive numbers under Geno Smith.

Following that offseason deal with the Broncos, many wrote the Seahawks off. Meanwhile, Denver was expected to become Super Bowl contenders.

As Geno said in that Week 1 win over his former teammate, though, he was written off, but he didn’t write back.

The passer is fresh off a 320-yard performance in a win over the Lions. That victory put his team at 2-2, despite having entered three of those games as underdogs.

Smith is now completing 77% of his passes and averaging 260 yards per game. He’s thrown six touchdowns to two picks and has Seattle scoring 24 points per game.

Not to mention his head-to-head win over Wilson in the season opener.

Russ, on the other hand, has struggled in Denver. The Broncos are also 2-2 after losing to the Raiders this past Sunday. That 32-23 defeat marked the first time the offense has notched more than 20 points in a game, despite having already played the Seahawks and Texans.

And don’t get fans started on how bad Wilson and Co. looked in an 11-10 win over the 49ers in a game that nobody appeared to want to win. Many in the Denver crowd booed the offense up until its lone touchdown drive in the fourth quarter.

Through his first four games in the Mile High City, Russ is averaging a respectable 245 yards an outing, tossing four TDs and a pick. The offense, though, is failing to put points on the board (16.5 ppg).

Many are saying the Seahawks are winning the Russell Wilson trade thanks to Geno Smith’s play to this point.

A number of fans hopped on social media to post reactions to seeing Geno Smith’s numbers with the Seahawks compared to Russ’s in Denver. It seems that many believe Seattle is winning the trade with the Broncos to this point.

Take a look at some of the response on Twitter.

One fan wrote, “Wasn’t Russell Wilson supposed to be like 4-0 or something? Just asking for a friend… Cause Geno is kind of playing better than Russ, who’s looking a lot like a woefully average guy in that Broncos offense…”

Wasn't Russell Wilson supposed to be like 4-0 or something? Just asking for a friend… Cause Geno.. Is kind of playing better than Russ, who's looking a lot like a woefully average guy in that Broncos offense… @Broncos @NFL

Another posted, “I know that Russ isn’t outplaying Geno by two firsts, two seconds, a TE, a DT, and $250M.” The Broncos gave up a lot to land Wilson this offseason.

I don’t know exactly how Geno and Russ compare, but I know that Russ isn’t outplaying Geno by two firsts, two seconds, a TE, a DT, and $250M.

Here are a few more reactions from NFL viewers.

Is it time to talk about how much the Seahawks upgraded at QB going from Russ to Geno?!?!

Seattle is definitely on the winning side through the first four games of the year.