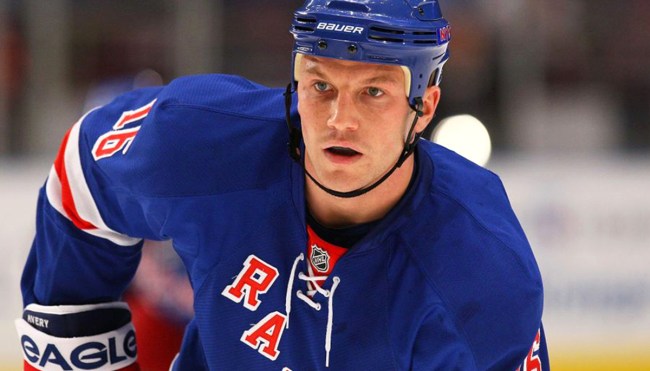 It would be somewhat disrespectful to classify Sean Avery as a “goon” when you consider the center was able to rack up 247 points over the course of the 580 games he played in the NHL, but with that said, Sean Avery didn’t exactly do himself any favors when it came to earning respect over the course of his time in the league.

The fact that the “Controversies and bullying” section on Avery’s Wikipedia page contains more words than the portion devoted to his playing career really tells you all you need to know about his reputation; if I had to bet, I’d say most people probably know him best for being the short-tempered pest who earned a suspension for an infamous quote about “sloppy seconds” as opposed to for his offensive prowess.

Avery played his tenth and final season in the NHL when he retired in 2012 following his second stint with the Rangers, and his most notable contributions since then have been largely limited to brief stints on television shows with a rotating cast of washed-up celebrities and podcast appearances where he does what he can to rile people up and get his name in the news.

While Avery managed to make headlines on Wednesday, it had nothing to do with a controversial comment he made on Spittin’ Chiclets; in a very surprising twist, the Orlando Solar Bears of the ECHL announced they’d signed the 41-year-old in a press release where the team made sure to point out he led the NHL in penalty minutes multiple times.

We have signed Sean Avery to an ECHL Standard Player Contract in our latest @pizzahut Transaction Report: https://t.co/SPjjyczoyP

If the move was a publicity stunt, it certainly worked, as it generated plenty of reactions (although they weren’t exactly all positive).

Like THE Sean Avery is signing ECHL contracts in the year of our lord 2022???

Aren’t his skates at the bottom of the mf Hudson??

Sean Avery has signed a contract with the ECHL’s Orlando Solar Bears to attempt a hockey comeback. I’ll let you know when the cry for attention is over pic.twitter.com/MYE2KOtiTv

Sean Avery’s return to professional hockey is undoubtedly a negative for hockey culture.

Why welcome back someone with a long history of bullying, harassment, and misogyny?

Not a good look for the ECHL or the Orlando Solar Bears.

Picturing Sean Avery hackin darts in the alley outside arenas between periods https://t.co/xeZttUgfLA

me seeing this: whoa, is sean avery younger than i remember?

me, looking up sean avery’s age: no, he’s 41, this is a remarkably bad idea https://t.co/J6txbgyhGs

Welp, this will certainly be a thing that’s happening.