How Can You Not Be Romantic About Baseball When 36-Year-Old Sean Kazmar Is Getting Called Up By The Braves After 12 Years In AAA?! 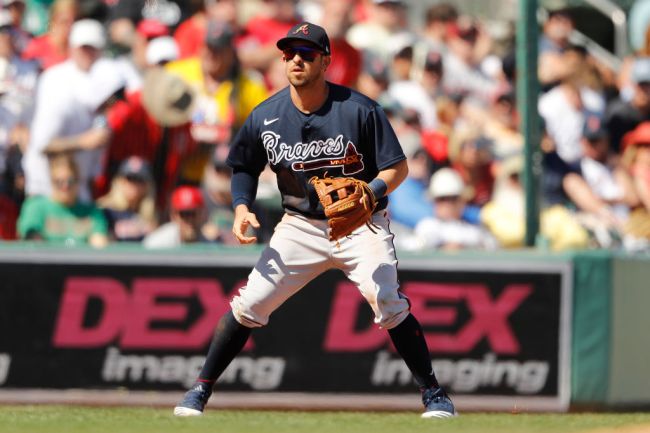 Braves infielder Sean Kazmar Jr. is doing something that hasn’t been done since 1949. Injuries have begun to pile up for Atlanta and the 36-year-old from Valdosta, Georgia is being called up by his home-state team to help fill out the roster ahead of Saturday afternoon’s game at Wrigley Field. Kazmar has made 667 appearances in seven seasons with the AAA Gwinnett Braves/Stripers and is the team’s all-time leader in games played and hits.

Despite his experience with the organization and time spent in the minor league system, he has never reached the MLB with the Braves. That is set to change this weekend.

For the first time since 2008, Sean Kazmar Jr. is back in the big leagues!#ForTheA pic.twitter.com/oTEPdCS6D7

Kazmar’s previous MLB experience consists of 19 games played for the 2008 Padres and ended with an appearance off of the bench on Sept. 23, 2008.

If Sean Kazmar Jr. gets into a game for the Braves (@JeffPassan just reported he's being called up), it'd be his first MLB appearance since he came off the Padres' bench on Sept. 23, 2008.

Here were the starting lineups for that game. pic.twitter.com/sLbNGZ2zgF

That means Saturday will make his first major league opportunity in 12 years and 206 days. He posted a 1.415 OPS and three home runs in 29 plate appearances during Spring Training and his ability to play all four infield positions, as well as the outfield, will make him an important piece for Atlanta as it works through roster struggles. Whether he will play on Saturday is still up in the air.

“Depends on how the game shapes up. I’m not going to force him into the game,” manager Brian Snitker said in pregame. “… There will probably be a situation where we’re gonna have to play him. He’s a part of the mix right now. I say it’s good to have a guy with that versatility, so it’s a good piece.”

The story is pretty amazing.

If you’ve never heard of Sean Kazmar, that’s understandable. He’s 36 years old. He’s a middle infielder. And the last time he played in the major leagues was in 2008, when he played some games in August and September for a San Diego Padres team that almost lost 100 games.

Sean Kazmar is Crash Davis. If he plays, the gap of more than 12 years between major league appearances will be the largest in a very long time. Checking with @ESPNStatsInfo and @EliasSports to figure out exactly how long, but it may have been decades since this last happened.

Even if Sean Kazmar doesn’t get in, he will always be able to say that it was worth it. That he is a big leaguer. That he didn’t spend the last dozen years kicking around baseball in earnest but that he did it because he always was going to make it back and good things take time.

The Elias Sports Bureau ended up looking into the gap in play and, while not quite unprecedented in MLB history, nobody has returned to the Majors after such a long layoff in more than 60 years. The last player with a longer gap between MLB games was Ralph Winegarner, who went 13 years and 14 days between appearances on the mound for the 1936 Indians and 1949 St. Louis Browns. Kazmar’s determination is even more impressive if he makes it on the field, which would mark the ninth-longest gap between appearances among players to start their MLB careers after 1900. The all-time record of 22 years and two days is held by Paul Schreiber, who took the mound for Brooklyn in 1923 and then didn’t make his next appearance until 1945 with the New York Yankees.

Kazmar’s story is why sports are awesome and makes it awfully difficult not to be romantic about baseball.