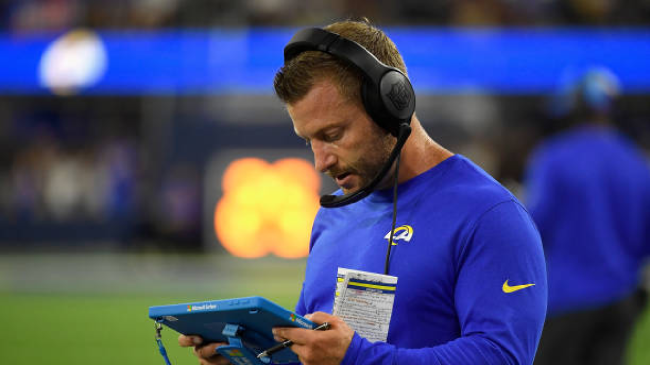 For the first time ever as a head coach, Sean McVay is coaching a Los Angeles Rams team that has a record below .500. That new experience for McVay comes courtesy of the Buffalo Bills, who dominated the Rams in Week 1 in LA.

The loss came despite a few additions that are expected to keep them among the top teams in the league. However, one of those new additions got surprisingly little usage in their first game with the Rams.

Allen Robinson was brought in to be the team’s new WR2 this season, but was only targeted twice against the Bills, making one catch for 12 yards.

Today, Sean McVay made it clear that Robinson would be more involved in the future.

We'll see if it comes to fruition, but hard to imagine Robinson only getting 2 targets again https://t.co/WIecbGoXqd

I think being able to have some more intentionality about that. Being able to call some plays where he’s the primary. Whatever I say is going to be an excuse, but it wasn’t good enough on my part in terms of the types of things that we were getting off to allow our players to be able to get into a rhythm. You credit Buffalo, they did a great job. But I think it’s just having a more specific approach to things that accentuate his skillset, similar to what I was answering earlier about what I think Arthur’s done a great job with his players offensively. That’s what I’ve got to do a better job of. Allen is certainly somebody that needs to be more involved and get more opportunities.

Mattew Stafford seemed to only be able to find Cooper Kupp in last week’s loss and while Kupp is an elite receiver, Stafford needs other options, especially against a defense as strong as the Bills. Without that, the offense stalled too easily against the Bills. With Van Jefferson currently injured, that other option has to be Robinson.

Robinson is coming off of the worst season of his career with the Bears, but the belief is that had more to do with the Bears than Robinson.

McVay needs to get Robinson involved early and often to make teams worry about somebody other than Cooper Kupp and it looks like that will be a part of the Rams gameplan the rest of the season.