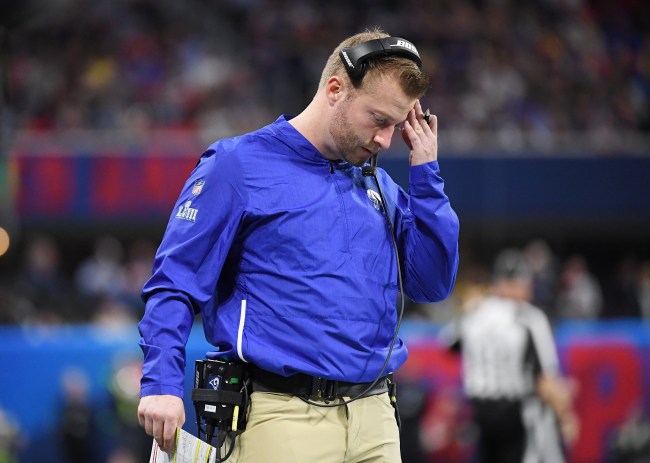 Sean McVay is a football genius, there’s no denying that. The 33-year-old head coach of the Los Angeles Rams has proven time and time again that he’s got a beautiful mind when it comes to reciting plays and breaking down opponents. McVay obsesses over preparation and details, which is why the youngest coach in the NFL has been so successful in his time leading the Rams.

While Sean McVay helped guide his Rams to Super Bowl LIII last season to play the New England Patriots, though, the outcome wasn’t what he had hoped. In fact, forget the result, how about the Rams’ high-octane offense being held to a measly three points by a Pats team that had plenty of questions marks heading into the Big Game? McVay’s supposed to be an offensive wizard, so how was New England capable of shutting down L.A.? In Sean McVay’s own words, he may have overprepared.

Talking to Sports Illustrated, the head coach said that watching every single game the Pats played leading up to the Super Bowl last season, including two previous Super Bowls the team played in, may have led to him over-thinking his gameplan against them. McVay also mentioned that having more time to prepare led him to an extra week to prepare threw him off.

“I watched every game from New England’s season. You see stuff that worked in, say, Week 3, but you forget about the amount of stuff that’s taken place since Week 3. You can watch so much film that you lose perspective. You have 18 games of film you can pore over. And then I even watched the Philly and Atlanta Super Bowls closely.”

“I operated knowing I had another week,” McVay said. “That urgency to completely finalize the game plan wasn’t quite there, and that led to me watching so much film that you can almost water down your thought process…

“You have so much time that you can over-prepare and get away from some of the things that helped you get there.”

It’s interesting to hear Sean McVay admit this, because, let’s face it, all of us over-think things. While some people could argue that there’s no such thing as overpreparing, when it comes to sports, it’s easy to second guess things when you’re studying film or tendencies — which seems to have happened to McVay. Given what he said above, it’s not surprising that the head coach said he would do things differently if given the opportunity again.

“I think there’s a lot to be said for the journey, and I appreciated what the season had entailed. But I could have appreciated the week and entirety of the event more. I kept myself kind of isolated because I didn’t want any distraction.”

Who knows how the Rams’ season will go next year, but given his young age and bright future, it’s a safe bet to assume Sean McVay will have a chance to redeem himself at some point in his career and learn from the mistakes he made the first time he coached in the Super Bowl.