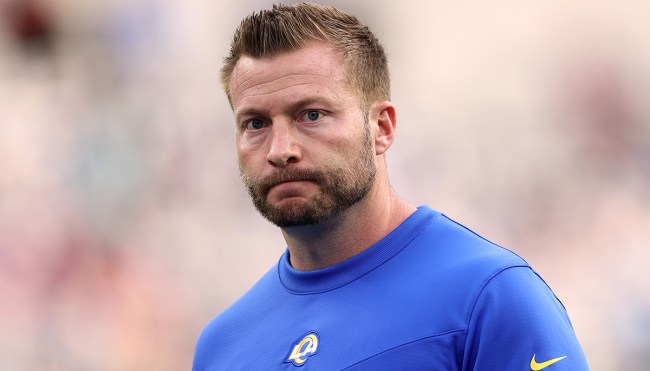 It’s kind of wild to think there are people who are old enough to spend a Sunday afternoon watching football games in a sports bar who have never lived in a world where Tom Brady hasn’t been playing in the NFL.

It initially appeared the end of an era had finally arrived when the legendary quarterback announced his decision to retire after 22 seasons shortly after the Buccanneers were eliminated from the playoffs this year. However, it took him less than two weeks to start teasing a potential comeback and less than two months to decide the whole “retirement” thing wasn’t really his thing after all.

It’s safe to say reactions to the news were fairly mixed; Tampa Bay fans were certainly thrilled to learn they’ll have the G.O.A.T. at their disposal next season, but plenty of other people—especially the guy who dropped $500K to buy what was supposedly the last touchdown ball Brady would ever throw—replied with a collective “Ugh.”

That apparently includes Sean McVay, as the Los Angeles Rams coach (who had his first attempt at a Super Bowl victory thwarted courtesy of Brady) shared his initial reaction to the development on Tuesday and, well, it’s safe to say plenty of people can probably relate.

Sean McVay on his reaction to Tom Brady's un-retirement: “I was thinking, ‘Shit, man, can we get this guy the hell out of this league?’ ”

Sean McVay is all of us.