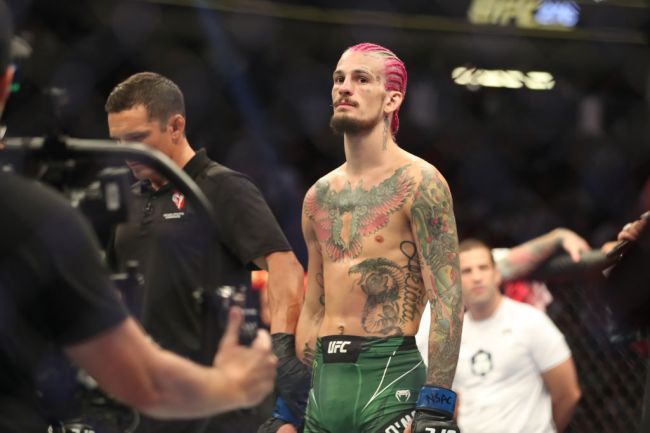 Heading into UFC 276, MMA fans were expecting that they would get the chance to learn a lot about where Sean O’Malley stood in the UFC’s bantamweight division when he took on Pedro Munhoz. Unfortunately, those fans were left disappointed as the fight had very little action and ended with O’Malley poking Munhoz in the eye.

Since the fight ended, Munhoz has stated that the eye poke scratched his cornea and that he couldn’t open his eye for 20 minutes after being poked.

O’Malley has had a different take on things. He has claimed that the poke wasn’t all that damaging and that Munhoz was just looking for a way out of the fight. Those claims came despite the fact that Munhoz had actually won the first round of the fight and has taken on many of the divisions toughest challenges in the past.

Now O’Malley has made his most ridiculous claim yet about the fight. On Thursday’s episode of the “BrOMalley Show” podcast, he claimed that Munhoz’s “fake” eye injury robbed him of a highlight reel KO.

The only problem with that claim is that there is absolutely no evidence to back it up.

The fight was stopped just over 3 minutes into round 2. In the 8 minutes O’Malley and Munhoz spent inside the Octagon, O’Malley landed 26 significant strikes. Only 14 of those landed to Munhoz’s head.

There is absolutely nothing about those numbers that indicate a knockout was coming. Munhoz has never been stopped in his MMA career and O’Malley isn’t exactly known for his one-punch knockout power.

It took him 230 strikes to finish Kris Moutinho and 86 to knock out Thomas Almeida, who is known for his questionable chin. O’Malley wasn’t on pace to come anywhere close to those numbers.

Sean O’Malley was on his way to winning round 2, but his claims that he was running away with the fight or that he was going to knock Munhoz out just seem ridiculous based on their histories and the way the fight had played out up until it was stopped.