Sean Payton (Probably, Accurately) Accuses The Buccaneers Of Throwing A Game In 2014 In Order To Snag No. 1 Pick 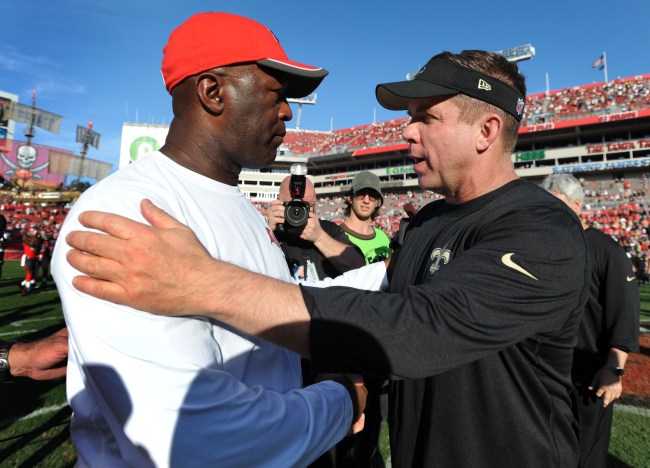 It’s been an interesting offseason thus far for Sean Payton of the New Orleans Saints. Not only did the Super Bowl-winning head coach become the first prominent figure in the NFL to test positive for the coronavirus — which he’s, thankfully, fully recovered from — but he also got called out by a former player, Delvin Breaux, who claimed that Payton made him feel like less of a man over a leg injury.

As we wait for any good news surrounding the upcoming NFL season — which has plenty of uncertainty at the moment — here’s to hoping Sean Payton continues to be the gift that keeps on giving throughout this offseason. Because, as he showed during a recent interview with CBS Sports, the head coach sure is giving us some juicy stuff to talk/write about.

That’s because, after New Orleans signed former Tampa Bay Buccaneers quarterback Jameis Winston, the No. 1 overall pick in the 2015 NFL Draft, Payton went ahead and accused the Bucs of tanking during the final game of the 2014 season in order to land the top selection in that draft. Yep, six years later, Payton’s out here throwing shots at an NFC South rival; so take a look below at what he said.

“Heck, they lost a game on purpose to us at the end of the season prior with [head coach] Lovie Smith,” Payton said in an interview with CBS Sports. “They forced Lovie to take his starters out of the game so they could get the one spot to draft Jameis.”

What a world we’re living in right now, guys. Only in 2020, where there’s a pandemic happening and fear of murder hornets, would an NFL head coach also accuse another team of tanking SIX YEARS AGO for the top overall pick in the NFL Draft. That said, Sean Payton’s point may very well be valid.

In the 2014 contest referenced by Payton, the Buccaneers led the Saints 20-7 at halftime. Rather than keep his starters in the game, then Tampa Bay head coach Lovie Smith did bench many of his team’s key starters, saying after the game that the plan was “to look at some more football players” — which sounds like a different way of, “we were tanking our asses off.”

By the end of the game, New Orleans won 23-20 after reeling off 16 points — keeping Smith’s Buccaneers at two victories on the season, which, due to tiebreakers, gave them the No. 1 overall pick over the Tennessee Titans. They used it on Jameis Winston, who was just recently released before signing with the Saints.

So is Sean Payton’s claim accurate? Well, here’s what Smith had to say in 2014 after his little strategy to pull some of his best players after leading at halftime, per the aforementioned CBS article.

“The guys you saw in the first half, the game plan was for them to be in there. The second half, we wanted to look at some more football players,” Smith told reporters after the game. “I think that’s not out of the realm of possibilities, to look at some other guys. We’re not going to the playoffs and we have a comfortable lead and we’re going to run the football.

“One win wouldn’t have helped an awful lot. We’re going to feel better when we’re winning our division. Until then, we don’t feel good about a lot except for knowing our roster a lot better and knowing the direction we need to go. If we had won today, we would’ve felt better about this game, but the season as a whole, that’s not where we want to be.”

If that doesn’t sound like a head coach all but saying his team tanked without blatantly coming out and saying they tanked, I don’t know what is. So does Sean Payton have a point about the Bucs throwing the game? Sure seems like it — and it’s funny AF that we’re talking about it six years later, when so much has changed with both teams.