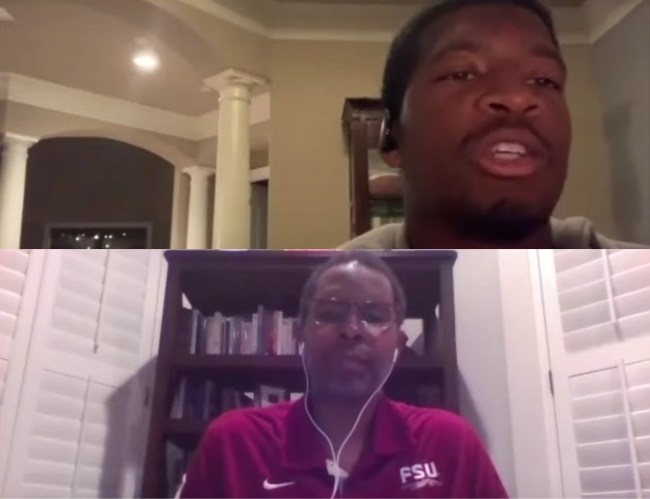 The New Orleans Saints now have the best quarterback duo in the NFL. Depending on who you are talking to, Drew Brees is the best QB in the league. He holds NFL records for most passing yards, most completions, and most TD passes. I personally think that Tampa Bay’s current starting QB is the G.O.A.T. but people from NOLA would debate that.

The Saints have landed Jameis Winston who signed a 1-year contract to be the backup QB for Drew Brees. Jameis threw 30 TDs for the Tampa Bay Buccaneers last season along with 30 interceptions, becoming the first player in NFL history to ever do so.

Former FSU national champion and Heisman Trophy winner sat down with former FSU legend, Heisman Winner, and National Champion Charlie Ward to discuss what’s next. Jameis sounds like he’s finally eating a slice of humble pie which is something that’s been said before. It will be interesting to see if it sticks this time. He told Charlie he’s thinking about his career, his family, and not about his ego or money.

“It was no better position than to be in the same room with someone that I’ve really looked up to, someone that I admired since I’ve been playing this game in Drew Brees,” Winston said on “Chalk Talk with Charlie Ward.”
In fact, Winston says being in the same QB room as Brees, Taysom Hill and the Saints coaching staff is “like a Harvard education in quarterback school.”
“I wanted to put my ego aside, put the money aside and think about my family, think about my career.”
“There’s a proverb. Humility comes before honor. So I have to humble myself and this is a once-in-a-lifetime opportunity to be with Drew Brees and be with the New Orleans Saints and just prepare. Just prepare for when my next opportunity is going to present itself.”
“I’ve done some great things with the Bucs. I’m going to miss being a starting quarterback. But you never know what happens. I think this is just a great and unique step to join Drew Brees and the New Orleans Saints and learn from him. Learn from one of the best to ever do it and make a great transition in my career.” (via TMZ)

If you have time for all 30 minutes of the interview you can check it out here:

I went to Florida State, I’m a born-and-raised Bucs fan. I’ve wanted to see Jameis succeed in the NFL as much as anyone and I’ve watched his career more closely than most people. I hope this works out for him in New Orleans because when he’s on he is one of the most exciting players in the NFL to watch. In fact, even when he’s off he’s still one of the most exciting players to watch because you have no idea what’s going to happen.

The thing I don’t understand is why this time will be any different. It’s not as if Jameis hasn’t been surrounded by the best coaches and players in the world throughout his entire adult life. Yes, Drew Brees is the best quarterback that Jameis will have ever worked with but it’s not like he was in the locker room with people he couldn’t learn from before.