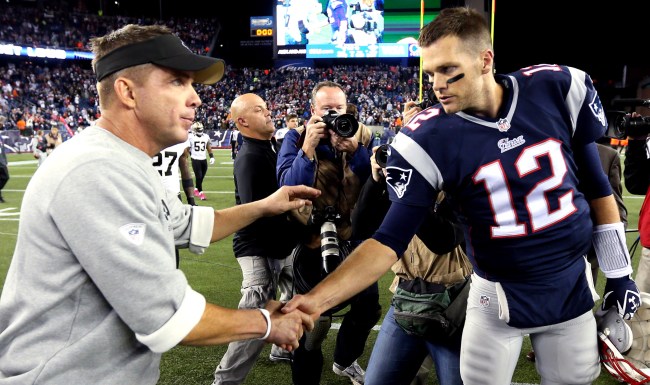 Before Tom Brady hastily returned to the Tampa Bay Bucs for a likely fruitless 23rd NFL season, his plan — as has been widely reported — was to link up with former New Orleans Saints head coach Sean Payton in Miami with the Dolphins.

This plan, as reports indicate, was ultimately derailed by Brian Flores’ lawsuit against the team, and as a result, Brady went back to the Bucs while Peyton stayed at Fox (for now).

During a recent appearance on Brady’s Let’s Go! podcast, however, the 58-year-old Super Bowl-winning Payton — who has been quite clear he intends to return to the NFL as a head coach in the near future — ‘joked’ that he and TB12 could still “get another team in trouble.” And as we know with jokes, they all have a bit of truth to them.

During the podcast, co-host Jim Gray eventually made this obsevation to Payton, who currently works for Fox: “Your hope and possibly one of your dreams as to be a teammate with Tom. And Tom’s coming to Fox at some point, and you’re leaving. I guess that’s a dream not only delayed but gonna be denied.”

“Who says Tommy’s coming to Fox right away?” Payton eventually said. “Clearly, we don’t want to get another team in trouble.”

As Payton alluded to in the above quote, Brady is set to join Fox Sports — where Payton currently works — as an analyst when he retires after he inked a 10-year, $375 million deal with them back in July. It’s unclear when Brady will begin that job, though, as he hasn’t given any indication that he plans on retiring after the season, especially now that he’s divorced.

To close out the 2022 season, Tom Brady and the Bucs will face off against the San Francisco 49ers, Cincinnati Bengals, Arizona Cardinals, Carolina Panthers, and Atlanta Falcons.