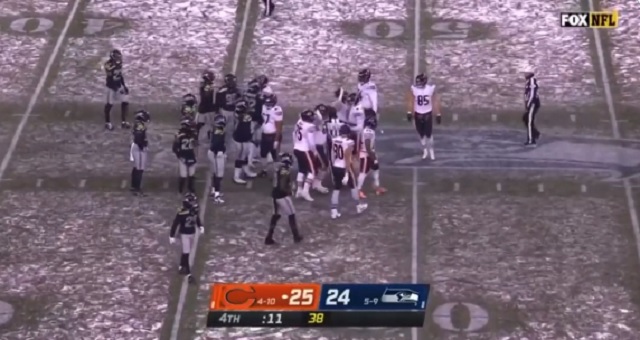 Seahawks fans weren’t thrilled about sitting in freezing temperatures just to watch their team lose to the Bears.

Before Sunday’s Bears-Seahawks game, Seattle was hit with a snowstorm that left much of the field and the stands at Lumen field covered in snow.

The scene in Seattle for Bears vs. Seahawks today 😮 ❄️ pic.twitter.com/t8uBEdrCx4

The conditions cleared by game time, but fans had plenty of ammunition to throw at players.

During Jimmy Graham’s game-winning touchdown late in the fourth quarter, the Bears’ tight end nearly got pegged by snowballs thrown by seahawks fans.

Is it me, or did it look like someone was trying to throw a snowball at @TheJimmyGraham? They may give Philly fans grief for something that happened more than a half century ago, but at least they hit Santa! https://t.co/bF2UyDb5Mx

While the Bears were kneeling the ball at the end of the game, a Seahawks player nearly got hit by a snowball thrown by a fan.

Apparently, more snowballs were thrown on the field while the cameras were away.

Fans throwing snowballs onto the field as the Seahawks will, yes, lose at home to the Bears.

Fans fire snowballs at the Seahawks after they waste a big day from Rashaad Penny, a record by Bobby Wagner, lose to the out-of-it Bears 25-24.

How much lower can Seattle go? It's now at 5-10 https://t.co/jiMriFuuK3 @thenewstribune