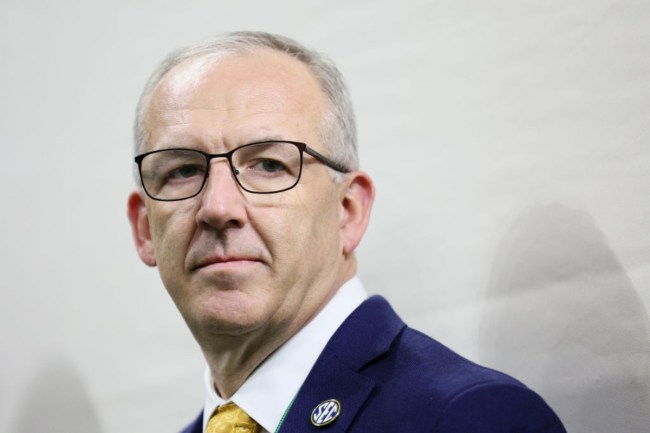 Most assume that an expansion from the four-team playoff is coming at some point down the line. Whether it’s expanded to eight teams, 12 teams, or whatever that magical number is, some team is always going to be on the outside looking in.

SEC Commissioner Greg Sankey is open to the idea of the CFB Playoff expanding to eight teams without any automatic qualifiers. This makes sense coming from the commissioner of the most dominant conference in college football.

With no automatic qualifiers in place, this would mean multiple, perhaps even three or four SEC teams would make the playoff each year. This means more exposure for the SEC and more money for the SEC, which are two things Sankey is paid to do as the commissioner of the conference.

While most college football fans would be on board with the idea of an eight-team playoff, every fan that doesn’t support a team out of the SEC would want automatic qualifiers in place so perhaps a non-power five team would get their shot at battling for a title.

The SEC already dominates the sport, adding four more spots with no real ‘rules’ in place would only make the conference that much stronger. Some people wouldn’t mind seeing that seeing as how the SEC is, again, the best conference in college football. Other fans, well, they wouldn’t be on board with that idea at all.

OF COURSE THE SEC SAYS THAT https://t.co/YEUmTeVBSz

The gluttony of the SEC is something else. https://t.co/gd33slSexS

I think the SEC might be on an island in this case. https://t.co/XuYB6Uqcju

A softening of a stance or posturing? https://t.co/v8e2ImXgEj

I think this would be a good option.
Could potentially have 5 or 6 teams from the SEC https://t.co/8HaqucbxJG

Aka: “We know we can get an 8-4 Auburn in over the Pac-12 Champion and we’ll be damned to see a more deserving team take our revenue.” https://t.co/vb5sMJNThx