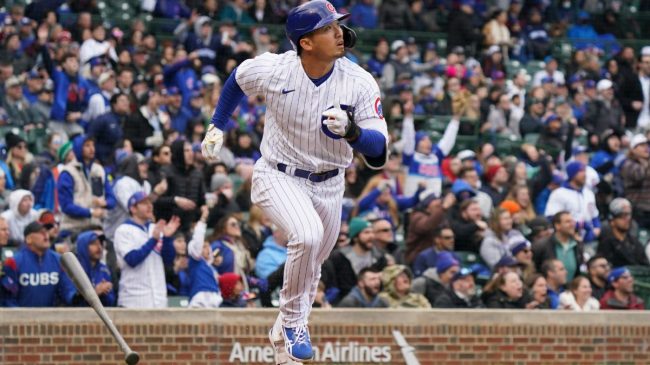 The Cubs made a huge splash in free agency this offseason with the addition of former Japanese League star Seiya Suzuki.

Suzuki played nine seasons overseas, hitting a combined .309 with 189 homers and 621 runs batted in over 1,055 career games. A highly sought-after player, Suzuki inked a deal in Chicago to the tune of $85 million over five seasons.

The outfielder’s success in Japan has carried over seamlessly into the MLB, as Suzuki entered Sunday afternoon’s matchup hitting .400 with three RBIs.

Today, though, fans got to see just what the superstar can bring to the table in the power department as he smacked his first career home run in the Major Leagues.

Check out the absolute moonshot below.

His first @MLB home run has not. pic.twitter.com/J1JxctAWj0

Suzuki’s blast travelled 412 feet, landing deep in the left field bleachers at Wrigley Field. The shot had folks talking, and fans are getting excited about the outfielder’s future with the Cubs.

Seiya Suzuki's first MLB homer is a no-doubter belted deep into the bleachers in left-center field. Third-base coach Willie Harris and Suzuki bow to each other as the right fielder rounds third. Villar and Rivas await at home and bow as well.

Seiya Suzuki has hits off the Brewers' All-Star trio of Corbin Burnes, Brandon Woodruff and Freddy Peralta, this time with an absolute blast to the bleachers. Quite the first major-league series he's having.

Worked into a 3-1 count against Freddy Peralta and then crushed a pitch to left-center. Neither Brewers outfielder moved an inch

Suzuki has dominated Major League pitching thus far. Through his first 10 plate appearances, the first-year player has recorded three hits and six RBIs while having swung and missed at just one pitch.

He’s certainly off to a hot start for Rookie of the Year consideration.

Seiya Suzuki has seen 46 pitches through 10 PAs in the Majors. He's swung and missed once so far. The other nine swings: Homer, single, single, sac fly, five foul balls.

Here is a look at the Peralta slider he crushed 110.9 mph to the bleachers in the first inning today. pic.twitter.com/viBHc3oqT5

The Cubs will close out the season opening series today as they look to complete a sweep of Milwaukee. Suzuki has played a huge role in the success to this point.