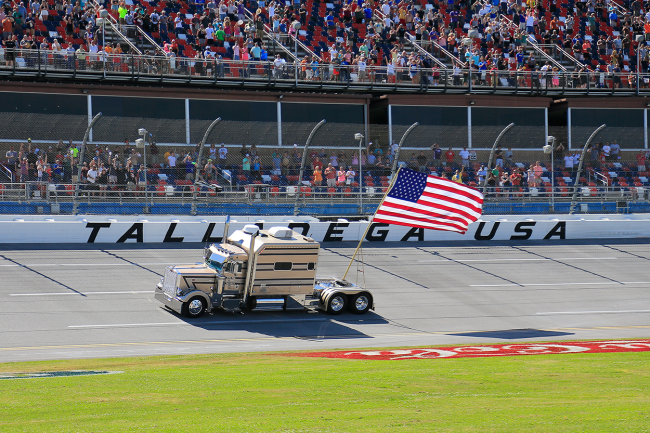 There are very few things in life that are more American than Talladega. At the forefront of that patriotism, of course, is the national anthem.

Over the course of the past two decades, a relatively new tradition has taken things to the next level prior to every NASCAR Cup race in Lincoln, Alabama.

After 9/11 and the death of Dale Earnhardt, a local truck driver named Johnny Ray had a crazy idea. What if he ran his gold, brown and chrome-colored Peterbilt semi-truck out on the track with an American flag attached to the back? One thing led to another and now the procession is at the forefront of the experience.

Although Johnny Ray passed away at 82 in 2020, his legacy lives forever and the tradition continues. His diesel big rig has carried the American flag around the 2.66-mile track every year since, including on Sunday.

This is @TALLADEGA. 🇺🇸 pic.twitter.com/WQWBGcXQ9H

The incredibly American moment is now an iconic fixture at Talladega. As the anthem plays and the truck makes its way around the track, the crowd roars and red, white and blue runs through the veins of all those watching.

It looks very cool on TV. However, it is even cooler in person and the truck goes a lot faster than you might think.

As the semi races around the historic venue, it tops out at 120 miles per hour. POV video from inside the cab shows a unique perspective of the tradition and it could not be more exhilarating.

The way that the rig sounds as it gets up to speed is music to the ears of race fans, truck drivers and Americans alike. What a rush!