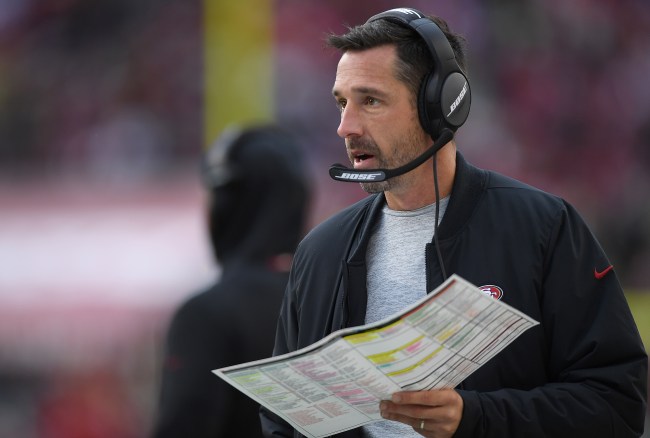 Senior Bowl players are getting the chance to showcase their football skills for NFL teams, proving that they’re worthy of playing in the league at some point next season. Not only are they competing to leapfrog one another in playing time and draft position, but they’re getting a little taste of what NFL life might be like by getting coached up by NFL coaches, with one being the San Francisco 49ers’ Kyle Shanahan.

After a tough regular season that saw his Niners only win four games, Shanahan might be taking out a little bit of that frustration on his Senior Bowl team, because, damn, the dude showed that he has the mouth of a sailor while trying to motivate them during a pep talk today. Funny thing is, the head coach was mic’d up for NFL Network’s coverage, so the F-bombs were flying left and right without any filter at all.

Take a look at the hilarious gaffe of Shanahan below.

While Kyle Shanahan was saying f*ck this and f*ck that, NFL Network commentators finally picked up on the fact that, oh yeah, we’re live, so we should probably cut away from the coach right now — which happened with the perfect reaction: “Allllllright, there’s Kyle Shanahan addressing his team.”

This is like the dad who tried to cover up the fact that his kid just dropped an F-bomb in front of their boss, or all those times when you’re embarrassed for doing something and need to quickly try to cover it up. It was unfiltered and perfect, which isn’t something they often teach you before going on the air.

All those Senior Bowl players are probably used to swearing from coaches, so it’s not a big deal to them. But, for any of the people watching the coverage on NFL Network, I’m sure it caught them a little bit off-guard since, you know, that’s not something you typically hear on TV everyday.