The Internet Reacts To Chaos At U.S. Open Final After Serena Williams Melts Down And Gets Penalized For Ripping Chair Umpire During Match 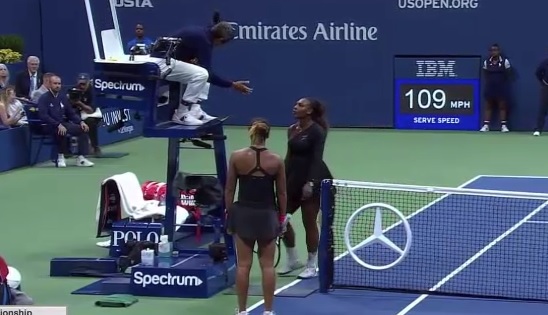 Things got heated during today’s US Open final after Serena Williams went at the chair umpire throughout the match.

During her match agains tNaomi Osaka Serena got angry with the chair umpire for penalizing her early in the match for a coaching violation.

This led to Serena confronting the umpire and letting him know that she wasn’t intentionally cheating when he gave her the coaching violation.

—Serena to the chair umpire after receiving a coaching violation pic.twitter.com/v6Q2GWYYOn

Serena got docked a point a bit later for her second code of conduct violation when she smashed her racket in a fate of rage.

"You owe me an apology…you stole a point from me..that's not right." Serena has HAD IT with this umpire. #USOpen pic.twitter.com/7yqwoL6eRg

The umpire had enough of Serena and gave her a third code of conduct violation which led to a game penalty.

Serena says "You're a thief, too!" to the umpire, who gives her a GAME PENALTY for verbal abuse!

A tearful Serena then pleaded to officials of how she was treated unfairly and how men wouldn’t have been docked for their language.

Serena Williams after getting penalized because she called judge a "thief" "There;s a a lot of men who have said things and because they are men nothing happens to them"….pic.twitter.com/Vr9WTspqFw

Serena went on to lose the match against Osaka but the Internet was on fire.

The crowd boos in protest of the US Open final's officiating. pic.twitter.com/hFAZdAIJYk

I know Osaka outplayed Serena but I’m such a Serena stan, yay for Osaka but again those calls definitely influenced that match, but yay for Osaka and Serena’s never ending class & grace.

Ridiculous behaviour here from Serena Williams, angrily pointing her finger and demanding an apology from umpire Carlos Ramos, who is merely doing his job #USOpen

The mental focus to play tennis at the highest level is draining enough. Anyone who remotely followed Serena’s career knows those tears were a build up of damn near 20 years of disrespecting her legacy.

Bad umpire Carlos Ramos owes Serena an apology. And also all the fans who came to watch (me and my family included).

I feel the worst part of all this is that the headlines will, once again, make Serena out to be a villain because of her “tantrums” when it is simply her sticking up for herself.

And good on Serena for being there for Osaka and stopping the booing. #USOpen

This match is such a case study in the b.s. women have to deal with: Serena Williams calling out a man for treating women differently and Naomi Osaka feeling like she has to apologize for winning.

im about to throw hands how dare you make her this upset pic.twitter.com/PcLIzS3COo

The chair’s ego in this situation not only penalized Serena Williams but also deprived Naomi Osaka of the spotlight (and smile) she deserved. #USOpen pic.twitter.com/VEDzDucP0y

Serena's had it and it's hard to blame her. She's had to deal with garbage her entire career: Her beads, her body type, her drug testing, her catsuit.

Good for her for standing up for herself.