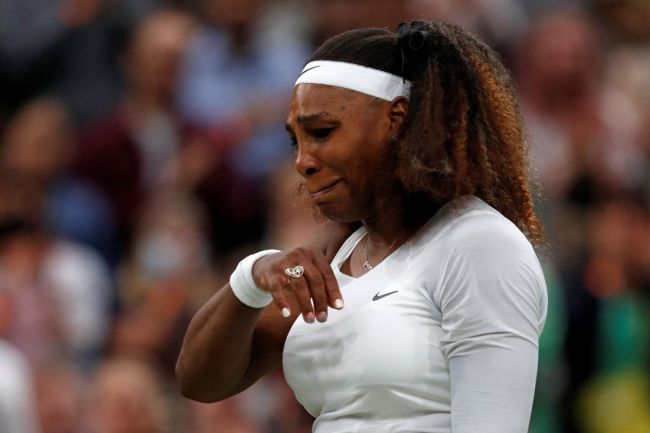 Serena Williams will not win her eighth Wimbledon title in 2021 after being forced to withdrawal in the first round due to injury. Williams’ decision to end her tournament came less than two hours after Adrian Mannarino suffered an injury on the same court.

Both injuries came on the same side of centre court and raise questions as to the court’s conditions.

Mannarino faced 6-seed Roger Federer in the first round. Despite being the heavy underdog, the 33-year-old Frenchman battled to a 6-4 loss in the first set. Trailing 0-1, Mannarino battled back to win the second and third sets to go ahead 2-1. Federer took the fourth and split the sets at two a piece.

As the fifth set began, Mannarino played a backhand and moved back toward the center. As he planted his left leg, he slipped and folded awkwardly on his right knee. Unable to continue, Mannarino chose to withdrawal.

Roger Federer advances to the second round of #Wimbledon after Adrian Mannarino went down with an apparent knee injury.

Mannarino tried to continue, but ultimately had to retire. pic.twitter.com/AlAZqK4Xb6

Both competitors had barely begun when disaster struck. During the sixth game, Williams slipped in a similar spot as Mannarino on the same side of the court.

She took a full 10-minute injury timeout and returned to try and continue. However, as she fought back tears and played through pain, she could not go on much longer.

Williams was forced to retire from the match.

Serena Williams receives a standing ovation from the crowd at #Wimbledon

Williams was forced to retire in the first round of after sustaining an apparent injury. pic.twitter.com/exFZxJJZGh

An emotional Serena Williams waving goodbye to Wimbledon crowd after suffering injury in first round pic.twitter.com/MqzK45JhUu

Both Williams and Mannarino suffered tournament-ending injuries in the same area of the court. As a result, questions are being raised as to whether the court is playable.

There are a few potential causes for the conditions.

For starters, it has been an exceptionally wet spring in England. The conditions in the air, on the courts and on the ground are more slippery as a result.

In addition, due to COVID-19, the courts have not seen as much action. Members and professionals alike have not been allowed to play for much of the past year and a half.

The grass is, as Novak Djokovic put it, “virgin grass.” That makes it more slippery.

Thirdly, many tennis players believe that the court is more slick when the roof is closed, as it was today. Without the sun beating down, or additional airflow, it is slipperier.

Are you catching the theme?

Federer addressed the court conditions after his match and after seeing Williams withdrawal. He showed extreme remorse, but was unwilling to say that the court was an issue that needed to be addressed.

#Federer about #Wimbledon Centre Court and Serena #Williams retire: "The grass is more slippery now, usually then it gets harder and easier to move on. This is obviously terrible that it's back-to-back matches and it hits Serena as well. Oh, my God, I can't believe it" pic.twitter.com/F3t4HaSFdj

There is no denying that the courts play faster and slicker during the early rounds before it is packed and worn by foot traffic. And there is no doubt that playing on grass requires a certain footing and movement.

However, if anyone is to know that, it’s Serena Williams. For her to slip in such a manner is unusual.

At the end of the day, it raises the question as to when and if the court should be ruled unplayable due to safety concerns. It will continue to be monitored throughout the early rounds.