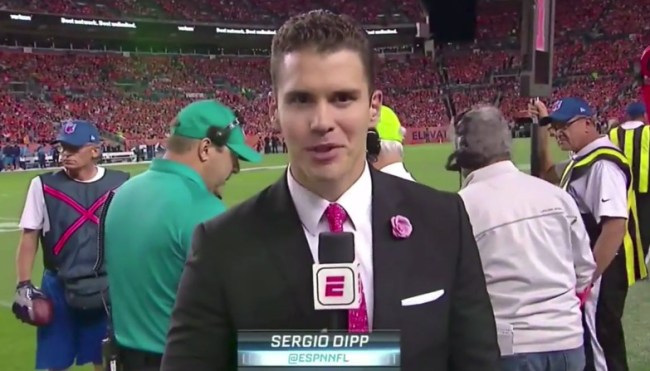 In case you didn’t happen to watch Monday Night Football on ESPN you missed the second greatest sports segment ever aired on television.

For some unfathomable reason the folks at ESPN thought it would be a good idea to have one of their ESPN Deportes reporters, Sergio Dipp, do a sideline segment in English. I only point out the language because after watching the report I wasn’t totally sure that Dipp had actually spoken English before.

He’s having the time of his life! Oh my…

Needless to say with millions watching his segment it immediately went viral.

Sergio Dipp will be banging Rex Ryan’s wife by the end of the night. This kid is going to be a superstar.

Replace the bottom score ticker with just a timer of when Sergio Dipp is returning to air. I’m not even kidding. https://t.co/MgohEDTCVp

Ken Bone needs to give his red sweater to Sergio Dipp. We have a new king.

Sergio Dipp. OK, this entire telecast is made up, right?

Just in case you were one of those wondering if Dipp was for real, he is…

He also seemed to take the massive amount of ribbing he received very, very well…

Damn right he better get another chance or we riot.

You aren't the reporter we deserve, but you are what we all needed

Oh yeah, the #1 greatest sports segment ever aired on television? Obviously it’s this…