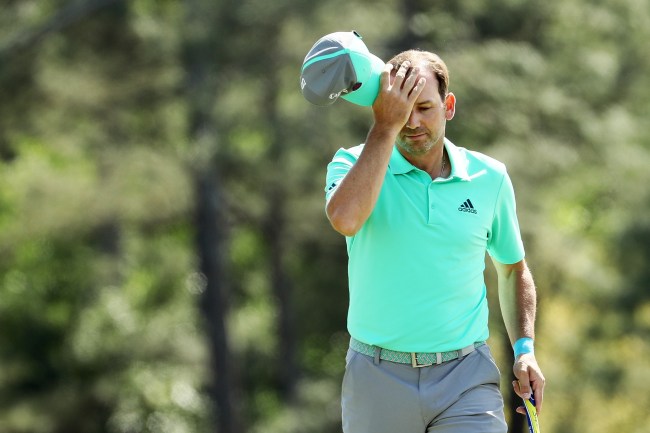 Sergio Garcia’s par-5 15th hole during the opening round of the Masters is one that will haunt him for a long time to come. The reigning Masters champion scored a 13 on the hole (tied for the most in Masters history) after hitting five balls in a row in the drink, ending any possibility of a repeat performance. At the time of me writing this, Garcia is currently tied for 77th in the field.

Four of Sergio Garcia’s five shots into the water. pic.twitter.com/NzAubcBZ7c

After Sergio shot himself out of the competition early, Golf Channel anchor Rich Lerner made a joke about Sergio naming his next child after the 13th hole, commonly known as Firethorn.

Sergio won't be naming his next kid Firethorn.

In February, Sergio named his newborn daughter Azalea, an ode to the flower that the Augusta National Golf Club has designated as the trademark of the par-5 13th hole. This also happened to be the hole that Garcia made an essential par on to catapult him to a playoff win and his first ever major win to beat Justin Rose at the Masters last year.

Sergio failed to take the light-hearted jab in stride, calling Lerner ‘funny man’ and bringing up that time he won the green jacket.

What happened on 15 @TheMasters yesterday was unfortunate for me and it hurt but I tried to handle it like a Masters Champion should. That same hole gave me that green jacket last year so we might end up naming our next kid Firethorn after all, funny man!😉 https://t.co/vMIDTMGhrf

His wife turned the defensiveness up a notch.

Hey @RichLernerGC, the next time you decide to tweet about my future child why don’t you use your brain and not do it? Don’t be an idiot. @GolfChannel https://t.co/Y4kHNZjDjv

My apologies to Angela and Sergio for my poorly timed attempt to lighten the mood. Missed the mark with a flippant comment. No ill intent.

Thank you for your apology, @RichLernerGC. I always appreciate a good sense of humor and a good joke, but when you reference a player’s family it’s not appropriate. If people really thought about it they might agree. All good and we can move on. https://t.co/sSxjwUnevu