Seth Curry, Who Married Paul George’s Ex-Girlfriend After PG Cheated On Her With A Stripper, Calls George A ‘B-tch Ass’ During Game 4 Of Clippers-Mavs Series 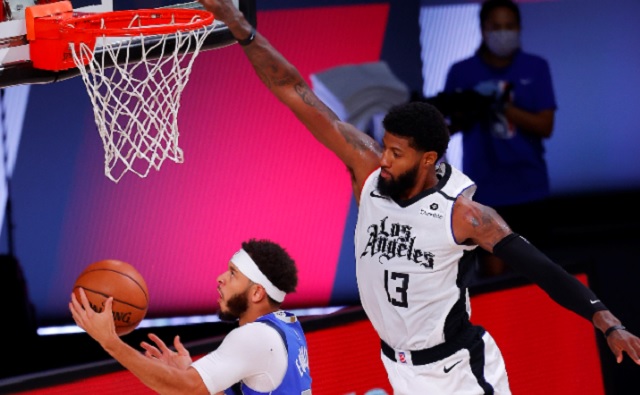 The Clippers-Mavs series is getting extra spicy.

During game 4 of the Clippers-Mavs series, Mavs guard Seth Curry was seen pointing and calling Paul George a “bitch ass” after scoring and and-1 basket.

Seth Curry points at Paul George and says "bitch ass" after And-1 pic.twitter.com/sdA1bpoF07

You want some real NBA drama? 5 years ago, Paul George dated his new coach Doc Rivers' daughter Callie and cheated on her, resulting in a pregnant stripper. Callie Rivers is now engaged to Seth Curry.

NBA Twitter had a field day with the Curry-PG beefing.

Seth cooking the man that did his wife dirty. I RESPECT IT.

Your daily reminder that Seth Curry is married to Callie Rivers, who was dating Paul George until he cheated and impregnated a then-stripper who he reportedly offered $1mil to get an abortion. Oh and her father is George’s current coach. Seth going to war for his wife what a king https://t.co/jXahVScz7V

Seth Curry for his wife: pic.twitter.com/XskYxFXGPJ

Seth curry being married to doc rivers daughter who was once with Paul George untill he got a stripper pregnant doesn’t get talked about nearly enough pic.twitter.com/yPhHFkPTaK