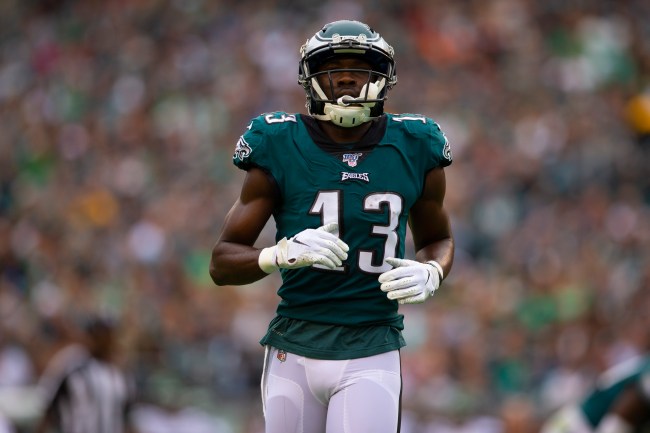 Someone needs to check Nelson Agholor’s bank account this morning because it seems like the Eagles receiver has it in with the mob or something.

That’s really the only reasonable explanation I can accept for the 26-year-old old not laying out for a Carson Wentz bomb in the Eagles embarrassing loss last night to the Cowboys.

That, or it was a three score game in the fourth quarter and Agholor didn’t want to get his uniform scuffed up on the turf.

This reminds me of the NBA when a player refuses to take a three-quarter court shot during the waning seconds of the quarter so he doesn’t fuck up his field goal percentage. And given Agholor’s drop tendency this season and his inability to track long balls, the odds of him hauling this one in were about as good as black licorice.

Still, Carson Wentz said after that after the ball lef this hands, he was confident he had a touchdown.

Here was Agholor’s attempt to explain the inexplicable:

Nelson Agholor on the missed deep pass between him and Wentz late in the game: #Eagles pic.twitter.com/04gxD4yPpR

“I tried to get open. I was hauling tail, you know, made a move on the safety, used the space that I had to run across the field and I was running, and by the time I was trying to track it, the ball was already out of position. I wish I had been able to get there, but I don’t know what happened because it’s two situations. I don’t know if he was rushed or whatever, but we had enough field I was trying to get to it.”

Former Eagles’ great Seth Joyner appeared on Postgame Live and went as far to say that Agholor is “nothing but puppy,” which may be the most insulting thing I’ve heard a grown man call another grown man.

“I’ve been defending [Nelson] for a long time,” Joyner said. “I’ve been trying to be the guy that sees the positives in his skill sets. Deep down inside, there’s either some pitbull, some dog in you or there ain’t. There’s nothing but puppy in him. When I saw him not lay out for that ball, could it have been a better ball, absolutely, but not to see the effort. One thing that doesn’t cost you anything is effort. You’re going to go up to the window tomorrow and pick up your paycheck and you put that effort out. You wouldn’t even dive for that football in a game that mattered??”

The silver lining for Eagles fans is they can blame one single play instead of a recognizing the true problem with the Eagles: they are just a bad team. Silver linings!

Can't drop a pass if you don't try and catch it

According to PFF, Nelson Agholor has caught the lowest percentage of catchable deep balls out of any wide receiver in the league (20%). Free agent after 2019.

When you see Nelson Agholor trying to track a deep ball pic.twitter.com/Smo5s1abuz

wentz to agholor after howie trades him to the cardinals for a box of cheez-its pic.twitter.com/8bJOVoyaq8

Weekly reminder that the Eagles were cool with Nelson Agholor being the 26th highest paid WR in the NFL this year.

Nelson Agholor is the only wide receiver I’ve ever seen in my life who makes absolutely no attempt to dive on a deep ball. He watches it. He doesn’t dive. He barely extends his arms. He couldn’t possibly be less interested in catching the ball. It’s an absolute disgrace to watch.

Thoughts and prayers go to Nelson during this difficult time.