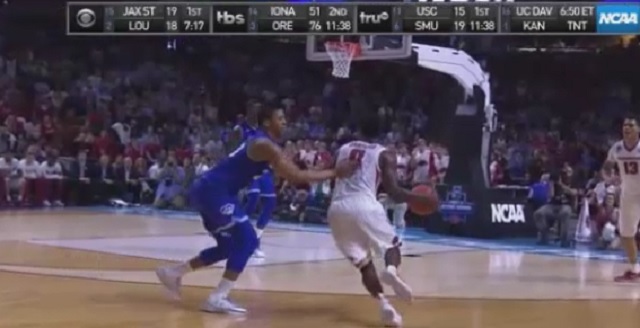 We have our first controversial call of this year’s NCAA tournament.

With 19.8 seconds left in the game, Seton Hall’s Desi Rodriguez was called for a flagrant foul while trying to commit an intentional foul.

This call pretty much gave Arkansas the game and Twitter was fucking livid.

The flagrant 1 foul call against Seton Hall was horrible 👎🏼

What a horrible flagrant call on seton hall #MarchMadness

Horrible call against Seton Hall on the Flagrant foul at the end of the game. Ark player did a good job selling it., but replay caught it

Flagrant 1 if that happens with 2 min to go in the 1st half. Not a flagrant at the end of the game when you have to foul. Horrible call.

The refs should understand game situation, but … why did he have to shove him in the back after making no play on the ball? https://t.co/S3v4wiKYgM

Flagrant Fouls are the biggest panzy call in sports #MarchMadness

According the refs, Rodriguez wasn’t making a play on the ball thus making it a flagrant 1.