SF Giants’ Sam Coonrod Refused To Kneel With Teammates Before Anthem, Says He’s Not ‘On Board’ With The Black Lives Matter Movement 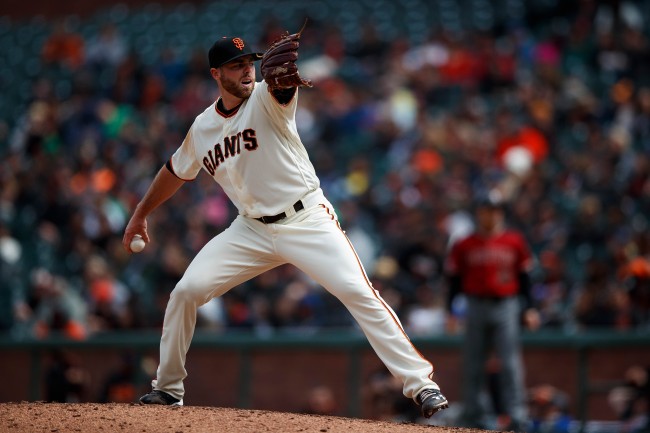 On Thursday night, before the MLB’s season openING game between the Dodgers and the Giants, both teams decided to make a unified demonstration to honor the Black Lives Matter movement. Every player and coach from both teams took a knee before the anthem and held a piece of black fabric, with the exception of one player who decided to stand.

The Giants and Dodgers all took a knee together before the anthem. Several Giants have continued to kneel during the anthem, including manager Gabe Kapler: pic.twitter.com/7F4DkAdalN

"Today, we are one." pic.twitter.com/fqH8NkJm8A

SF Giants relief pitcher Sam Conrod was the player who chose to stand during the demonstration.

After the game, Coonrod explained his decision to not kneel with his teammates and says he doesn’t believe he can ‘kneel before anything besides God.’

I meant no ill will by it. I don’t think I’m better than anyone,” Coonrod said after the game. “I’m a Christian. I just believe I can’t kneel before anything besides God — Jesus Christ.

“I chose not to kneel. I feel that if I did kneel, I would be being a hypocrite. I didn’t want to be a hypocrite. Like I said, I didn’t mean any ill will toward anyone.”

Coonrod went on to talk about why he isn’t on board with the Black Lives Matter movement due to clashes with his Christian faith.

After the loss to the Dodgers, Giants manager Gabe Kapler said he had spoken to Coonrod and didn’t have a problem with his pitcher expressing himself by not kneeling.

Gabe Kapler postgame says he talked to Sam Coonrod about not kneeling during the black ribbon part of pregame and Coonrod told him, "he's a Christian and he only kneels for God." That's how he chose to express himself. He says Coonrod is willing to discuss further with the media.