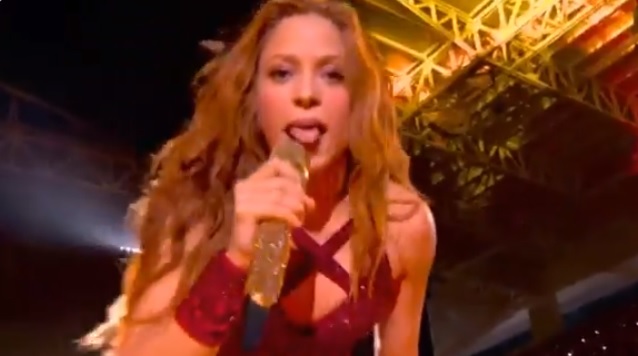 We have a new meme for February and it came during the Super Bowl halftime.

During Shakira’s portion of the halftime show at Super Bowl LIV, Shakira made a gobble sound that is apparently an attempt at an Arabic chant.

Not sure what Shakira did here but I’m still into it pic.twitter.com/xx2X7jxOOS

Update: Others are saying it’s a sound made during Barranquilla carnivals.

For those who doesn’t know this is part of a tradicional dance in Barranquilla’s carnival call “negritos puloy” #SuperBowl pic.twitter.com/BsaCiuf5Db

Shakira got instantly memed even before the halftime show was over.

What I probably sound like trying to speak Spanish #SBLIV #Shakira pic.twitter.com/Mi9cQcP64V

Waiting for the meme’s of Shakira looking at the camera and doing that weird tongue thing to drop pic.twitter.com/aM3XVlStNQ

Shakira!!! You still looked hot doing that weird sound within your tongue!❤️👅🔥😍 pic.twitter.com/07eydFTgGs

*someone telling me a long story*
My brain: https://t.co/i0wCoMtnUj

Shakira can gobble like a turkey and I’ll still fal in love https://t.co/oh03oIAsDM

Not sure what Shakira was doing here, but this is all I could think of. #SuperBowlLIV #HalftimeShow pic.twitter.com/tkEPxgOVma