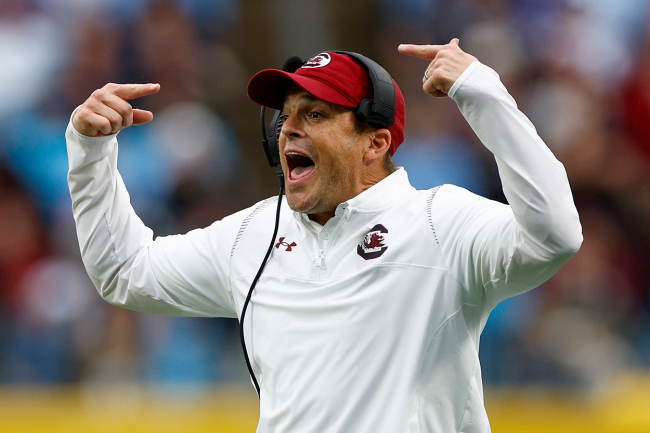 When South Carolina hired Shane Beamer as its head football coach in 2021, the hope was that he could help lead the Gamecocks back to national relevance. The expectation was not to be great right away, but to slowly build back to a winning culture.

And then, after three-straight years of being ranked in the AP Top-10 from 2011 to 2013, South Carolina finished with a winning record for only the fourth time since in 2021. Beamer exceeded expectations in year one and did so without a true, healthy quarterback for much of the year.

To begin the year, the Gamecocks started Zeb Noland, who came to campus as a graduate assistant. And then they turned to Luke Doty in Week 3 after Noland got injured. FCS transfer Jason Brown was the starter to end the season and then receiver-turned-quarterback Dakereon Joyner led South Carolina to a 38-21 win over North Carolina in the Duke’s Mayo Bowl.

If South Carolina could win seven games without a quarterback, imagine what it could do with a quarterback. The Gamecocks are hoping to find out this fall.

During the offseason, Beamer landed commitments from Spencer Rattler and tight end Austin Stogner. When the head coach found out, he lost his mind.

A recent profile from ESPN’s Chris Low detailed the exchange.

On Monday, December 13th, Beamer was at home watching Monday Night Football when he got a call. Upon answering, it was Stogner, Rattler and each of their fathers on the line.

After a short moment of small talk, the two former four-star Oklahoma commits let Beamer know that they were committing to the Gamecocks.

At first, Beamer didn’t believe it. He asked them if they were serious.

When Rattler and Stogner said yes, Beamer put his phone down, briefly excused himself and ran outside to go yell. And then, when he told his son who was in the room, both of them started screaming together and Beamer may have even shed a tear.

Year two of the Beamer era at South Carolina comes with a lot of hype. The question now is whether he, his new quarterback, and his new tight end will be screaming with joy at the end of the season as he did during the offseason.