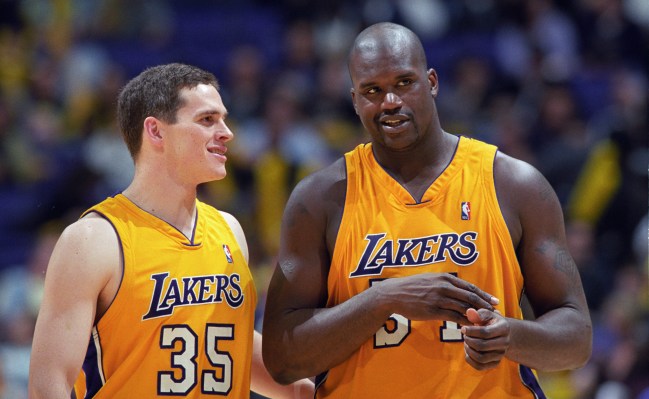 Sometimes a legend is better left as just that – a legend – because on occassion, the truth behind the legend is not something we really need to hear. Today is one of those days.

During his appearance on Fair Game with Kristine Leahy this week, Shaquille O’Neal addressed claims that he used a secret code with Lakers teammates to keep them from passing to Kobe (which we covered earlier this week), explained his decision to retire because he felt he was “robbing” the Celtics chasing a ring, why he took former teammate Mark Madsen on a shopping spree and felt the need to “protect” him, and how he’s still mad at then CNN broadcaster Fred Hickman for denying him unanimous MVP honors for the 1999-2000 season.

All fascinating topics, but the one topic that certainly stood out the most was when Leahy made Shaq finally address the well-traveled rumor that he once showed up to a Lakers practice naked.

I say he “addressed” it because after much back and forth he wouldn’t “officially” confirm nor deny it to Leahy, but yeah, he did.

“In basketball, there’s the term ‘shirts and skins’… you took that 100 percent literally one day and came naked to practice with just your shoes on,” Leahy mentioned to Shaq.

After saying could not confirm it, despite his boy Mark Madsen, who they just talked about, saying he did it, Shaq asked Leahy, “Did I have shoes on?”

“Not naked then,” answered Shaq.

She wasn’t having it, but he hilariously persisted.

“Okay, did you or did you not go into practice with only your shoes on?” asked an exasperated Leahy.

You really owe it to yourself to watch the entire comical conversation below.

As for the other topics mentioned, here you go…