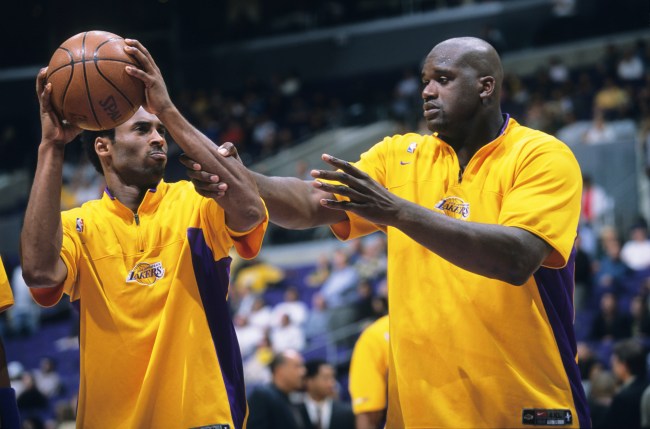 Last month, admitted Kobe hater and former Shaq teammate, revealed that the legendary big man once told him the Lakers had a system to stop giving Kobe the ball.

Bell, who served a one-game suspension for clotheslining Mamba in a first-round playoff matchup in 2006, played on Shaq’s 2008 Suns team, when O’Neal allegedly taught the team a hand signal to keep the ball out of the hands of Gordon Giriček, a teammate who Shaq once put in a chokehold until he was unconscious.

Bell said that Shaq first implemented the system–which consisted of a downward thumb twitch–during his eight year tenure with the Lakers to avoid Kobe chucking.

During an appearance on FS1’s Fair Game with Kristine Leahy,

Shaq begins by essentially revealing that Raja should have kept his mouth shut, dismissing his existence all together.

“I don’t know who that is,” Shaq told Leahy. “There’s three ways to manipulate the mind. What you read, what you hear, and what you see. But, a lot of the times you’ve got to check your sources. I’m the source. If I don’t give you the information than it can’t be real.”

Eventually Shaq claims that he “doesn’t remember saying that to Bell, but never denies it’s true.

Later in the interview, Shaq continued to beat around the bush, quite literally, when he responded to claims made by former teammate Mark Madsen that Shaq once showed up to practice totally naked, save for size 22 shoes.

“Did I have shoes on? It’s not naked then…. The true definition of ‘naked’ is nothing on. If I had shoes on then I wasn’t naked. Did I come to practice underdressed? Maybe. Fully naked? Never. Who does that?”

Meanwhile I show up to work naked and I’m suddenly a “”””sex offender.””””” Double standards. Bullshit.