Shaq Says Kyrie Irving Is An Idiot, Charles Barkley Says He Should Be Suspended In Scathing ‘Inside The NBA’ Segment 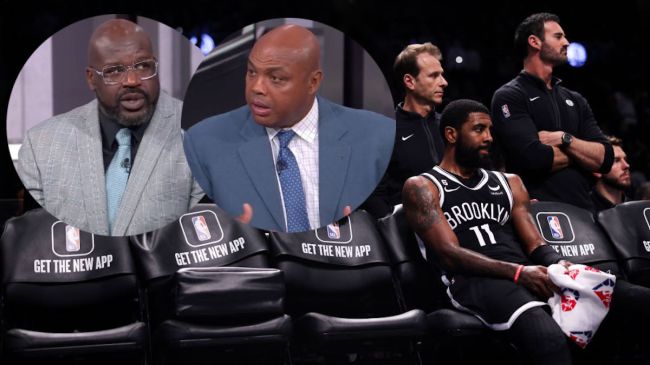 Inside The NBA analysts and Hall of Famers Charles Barkley and Shaquille O’Neal ripped into Brooklyn Nets point guard Kyrie Irving for his recent anti-Semitic rhetoric on Tuesday night’s episode of the Emmy-winning NBA pre-and-post-game show.

Each given the floor to speak, Shaq called Irving — who shared a link to the anti-Semitic film “Hebrews To Negroes” on his Twitter account — an “idiot” in his minute-long rant.

“My formula has always been the same. 60% to make you laugh, 30% to inspire you, and 10% whatever I’m selling. You have to be aware of what you’re doing and you have to be aware that sometimes when you put stutff out, not everybody is going to like it. Some people are concious, some people are not: I can tell he’s not conscious, he doesn’t really care what’s going on,” Shaq said.

“But us, I know that the game that we used to love and we promote, it brings people together. And it hurts me sometimes when we have to sit up here to talk about stuff that divides the game. Now we’ve got to answer for this idiot has done,” he continued.

“It hurts me sometimes when we have to sit up here and talk about stuff that divides the game.”

Barkley then followed suit, saying that the NBA “dropped the ball” by not suspending Kyrie for his recent anti-Semitic rhetoric.

“I think [NBA Comissioner] Adam Silver should’ve suspended him. First of all, Adam is Jewish. You can’t take my $40 million [most likely in reference in Irving’s yearly salary] and insult my religion. You’re going to insult me? You have the right,” Barkley said.

“But I have the right to say, ‘No, you’re going to take my $40 million and insult my religion. I think the NBA… they made a mistake. We have suspended people and fined people for making homophobic slurs, and that was the right thing to do. If you insult the Black community, you should be suspended or fined heavily… I think him acknowledging the Alex Jones thing, something should’ve happened with that, too, because that dude is crazy,” Barkely continued.

Chuck then also doubled down on Shaq’s comments by calling Kyrie an “idiot” as well:

“I think he should have been suspended.”

On the night of Steve Nash’s firing, Irving backed up his $34 million/year contract by posting four points, seven assists, and six rebounds in 33 minutes of action during a loss to the Chicago Bulls. The Nets are now 2-6 and sit in 13th place in the NBA’s Eastern Conference.

RELATED: The Takes About Suspended Celtics Coach Ime Udoka Getting Hired By The Nets Are Insanely Spicy