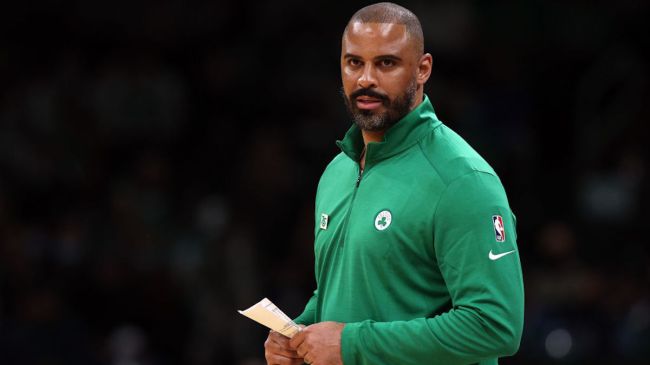 After parting ways with head coach Steve Nash earlier this morning, reports indicate that the Brooklyn Nets plan to hire Ime Udoka — who is currently suspended indefinitely by the Boston Celtics after leading the team to the NBA Finals last year — as their new head coach.

Given the fact that details around Udoka’s suspension are still murky, the reaction to the fact that the Nets are deciding to add him and all his baggage to their already explosive (and not in a good way) and defective culture has obviously been quite spicy.

Many people have pointed out how strange it is that the Nets were seemingly able to complete their investigation into Udoka faster than the Celtics were:

I'm sure the Nets have done their due diligence with a thorough and deep-diving investigation into Ime Udoka in the last five minutes.

Others are amazed by how quickly the team has made contact with Udoka:

Steve Nash ain't even clean out his desk yet and they already put Ime Udoka's name plate on the front door.

Obviously, fans have their doubts that adding the 45-year-old coach to their current crop of Nets players is a good idea:

The Nets hiring Ime Udoka as their next coach pic.twitter.com/PtSLJ6m5eI

Udoka leaving the Celtics for the Nets pic.twitter.com/TCnKGJKQsO

Udoka waiting for the Celtics to trade him to the Nets pic.twitter.com/5odTxpYFBq

Now, that i've updated our story on the Nash to Udoka move, I gotta say I am personally disgusted with the WHOLE situation and like a lot of fans I've spoken to this morning, I believe It is going to take a long time for us to feel comfortable with this franchise. If ever.

Hey one quick note on the due diligence front, Nets: Udoka is currently suspended for having an inappropriate relationship with a female Celtics staffer in violation of team policy. Not sure if you've heard. https://t.co/1A22PSf5Pf

I'm sure the Nets will be fully transparent about their investigation into Udoka as front offices typically are in these scenarios.

Nets Owner calling out Kyrie for whatever then hiring Udoka within a day of firing Nash is hilarious, clown franchise

Not only will Udoka have to fix the Nets’ failings on the court — their defensive is terrible, as they’re currently giving up the third-most points in the league — but he’ll also have to deal with the erraticness of point guard Kyrie Irving, who is perhaps the most toxic player in the NBA (and perhaps the most toxic athlete in America) as a result of his recent promotion of anti-Semitic views.

After sharing a link to the anti-Semitic film “Hebrews to Negroes” on his Twitter account, Irving doubled down on his stance in an intense exchange with ESPN report Nick Friedell as he said “not gonna stand down” on his beliefs and that he’ll only get “stronger and stronger because he has a “whole army around him.”