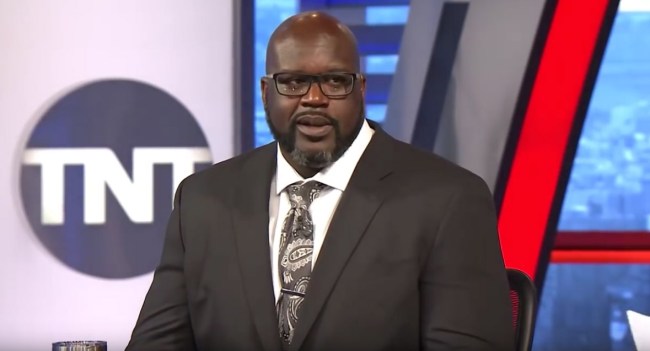 When Shaquille O’Neal and Charles Barkley are in the same room together, odds are something hilarious is going to happen, but the duo has really gone above and beyond over the last few days delivering some pretty epic content.

During a commercial break on ‘Inside The NBA’ last week, we saw Barkley jump out of his chair with a leg cramp and Shaq running to his rescue to help relieve his co-host’s pain by punching his hamstring. While there weren’t any leg cramps during Tuesday night’s NBA on TNT coverage, we were gifted a great moment after Barkley decided to mention Shaq’s grandmother in a joke.

When commentating over a highlight of a player’s hook shot, Shaq asked “you know who what reminds me of?” Barkley quickly hit him with “Who, your grandma?” and that’s when O’Neal’s mood changed.

Shaq said he would “reach across this table” after Barkley’s comment, and based on the look on his face, he didn’t really seem to be joking.

Gonna be some furniture moving if Chuck talks to Shaq like that again. pic.twitter.com/d1kgKChXnc

It’s mostly fun and games between Barkley and Shaq, the two ripping on one another night in and night out is what makes ‘Inside The NBA’ so great, but it’s probably a wise move that the show’s producers decided to seat the two on completely opposite sides of the desk.

Not only did Barkley upset Shaq during the show, but he also guaranteed that the Hornets were going to win their play-in game against the Pacers. That did not happen, the Hornets were atrocious on Tuesday night and lost by 27 points. It’s not the first time, nor will it be the last, that a Barkley guarantee fell flat.