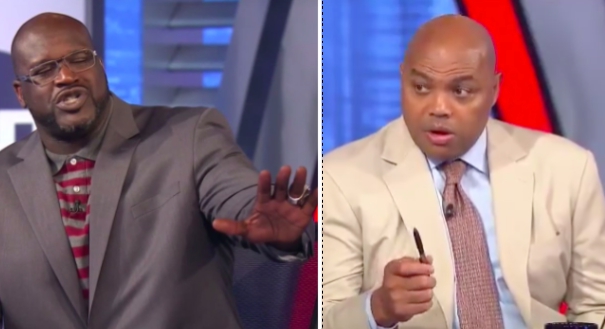 Shaquille O’Neal and Charles Barkley are basically two young brothers cramped in the backseat of a car with the air conditioner broken on a long road trip to grandma’s. But not the cool grandma who hooks you up with toys and candy, the one whose most valuable offering is a Werther’s Original and a pair of loosely knitted mittens.

Their is an undercurrent of unconditional love that allows them to recklessly throw personal jabs at one another without destroying the entire TNT set.

Last night, what started out as a discussion about Raptors coach Dwane Casey’s relationship with his best player, DeMar DeRozan, turned into a passionate sparring over each NBA legend’s playing days.

Things Charles Said That Would Hurt My Feelings If I Were Shaq:

-Kobe Bryant and Dwyane Wade had to carry me up and down the court to acquire titles.

Things Shaq Said That Would Hurt My Feelings If I Were Charles:

-You don’t know what you’re talking about when it comes to championships.

-You got babied that why you ain’t win.

-I got three Finals MVPs, how many you got?

I feel for Chuck here. He joins Karl Malone, Dan Marino, and Uncle Rico as the best players to never win a championship, despite being one of only four players to ever record over 20,000 points, 10,000 rebounds, and 4,000 assists. Can we just give him an honorary NBA title at this point?