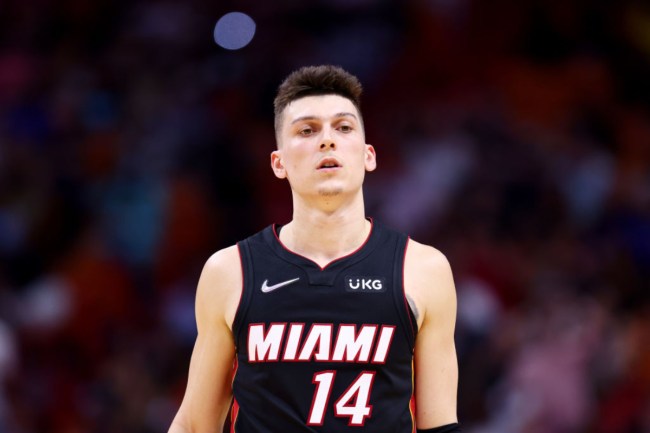 Tyler Herro has made significant steps in his game since being drafted 13th overall by the Miami Heat in the 2019 NBA Draft. This season, his third in the league, has been a coming-out party for the Kentucky product as he averaged over 20 points in the regular season and was named NBA Sixth Man of the Year.

Herro has put in strong performances so far in the postseason, as well, averaging 15 points per game in just 29 minutes of action. Given his strong year and consistent play coming off the bench for Miami, Shaquille O’Neal thinks he belongs in the same tier as some of the other top young players in the NBA.

“Anybody who talks like that and comes out and plays like that, you’ve got to believe them,” O’Neal explained on ‘Inside The NBA.’ “He said ‘you guys are always marveling Trae and marveling Luka, you need to marvel me,’ and we’re all marveling him right now.”

The man sitting opposite Shaq, Charles Barkley, wasn’t having it.

Barkley doesn’t agree that Herro is in the same category as Doncic or Young. His biggest argument against Shaq’s take is that Herro predominantly comes off the bench for the Heat.

“The kid’s a heck of a player but he’s not in the same category as those guys because they’ve got different responsibilities,” Barkley said.

“Coming off the bench, being instant offense playing against bench guys is not the same as going there every night, having to get 25-30 and lead your team.”

Barkley’s argument here is certainly a strong one, and one that most NBA fans will likely agree with.