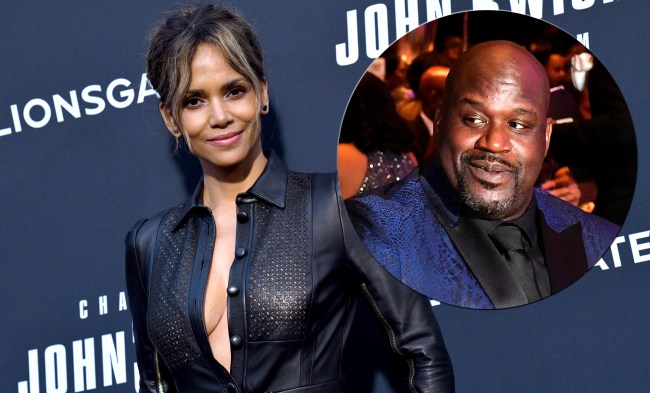 Inspiration comes in all forms. Especially in sports. Even more so for players who possess abilities far beyond those of us mere mortal humans. Like, say, 15-time NBA All-Star Shaquille O’Neal, for example.

I mean, what could possibly motivate a guy who in his prime stood 7-foot-1, weighed 325 pounds and could dominate the paint in the NBA like few before or since, just by imposing his will at any given moment during a game?

Never been a shady beach. 😂

Berry, five years Shaq’s senior, was apparently a major motiviating factor for the Diesel, according to O’Neal, who says she was the inspiration behind his best game ever in the NBA.

“My best game was at the New York Knicks,” Shaq recently told Cheslie Kryst of Extra. “I was about to shoot a free throw and Halle Berry was looking at me. I went back to the bench and told everybody, ‘Do not shoot the ball. Make sure I get the ball every single time.’ That was my best, all because Halle Berry was there.”

Regardless of which game it was, it is certainly understandable how a guy like Shaq could be inspired to do his best by having Halle Berry in the audience.

Happy #IndependenceDay y’all!! Wishing a safe and restful time to everyone and their families. ⁣⁣ ⁣⁣ This year, we have re-defined what it means to be patriotic. Let’s continue to fight for true independence for ALL this #IndependenceDay – check stories for ways to use your voice, advocate for those who need our help and create lasting and actionable change in your community. Cheers! 🥂