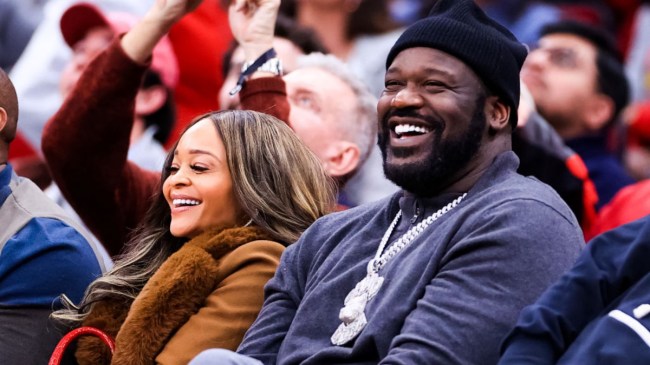 It hasn’t been going well for him lately.

It started at the beginning of the month with Shaq stating that he would eat frog legs if the Georgia Bulldogs beat the TCU Horned Frogs in the College Football Playoff National Championship.

Georgia dominated the game and won 65-7.

He paid up on the bet and ate the frog legs in front of a national audience.

The Big Fella is a man of his word 👀@SHAQ really ate frog legs to settle his bet with EJ 🐸 pic.twitter.com/jKCVYYaSyi

That loss didn’t stop him from making another ill-advised bet.

His next bet came at halftime of last week’s matchup between the Philadelphia 76ers and the Los Angles Clippers. At the time, Joel Embiid had already racked up 28 points and Shaq didn’t think he was close to done.

Shaq bet that Embiid would finish the game with 50 and said he would grow out baby hairs like Candace Parker.

"If he don't get 50, I'm getting baby hairs" 🤣@SHAQ has a lot on the line for Embiid's second half 😂 pic.twitter.com/YBvmkiP1l6

Embiid didn’t quite reach the total Shaq needed. After that dominant first half Embiid was only able to add 13 in the second half for a total of 41 points.

Today Shaq paid up on his most recent bet.

.@SHAQ lost a bet to @Candace_Parker and grew some baby hairs 💀 pic.twitter.com/Fo5o4pHmg4

While it may be a good idea for Shaq to lay off of the wagers for a little while, fans will be hoping he continues picking losers.

Between the frog legs and now his new hairstyle, Shaquille O’Neal being a losing gambler has been great television for NBA fans.