Bros Fishing For Snapper Are STUNNED When 10.5-Foot Thresher Shark Jumps Into Their Boat And Wrecks It 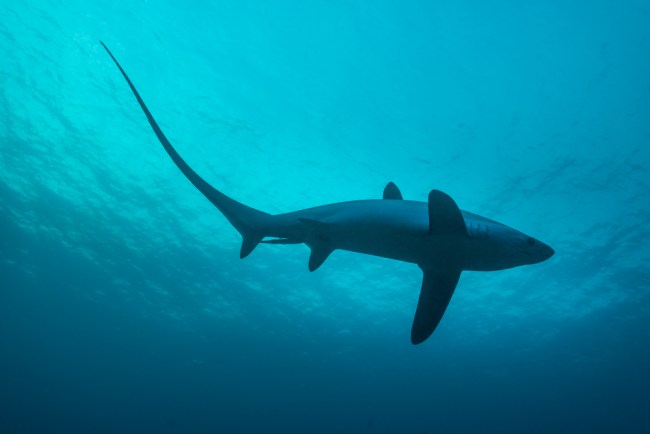 Two Australian bros were out fishing for snapper just half a mile off Port Macdonnell in South Australia when they hooked into something much larger. After initially peeling off a ton of line the 10.5-foot-long thresher shark took its first jump, and that’s when they realized what they had on their hands.

Thresher sharks are certainly acrobatic, not quite on the same level as mako sharks, but threshers are still known to go insane when they’re hooked next to the boat. They’ll flip in the air, and if you’re unfortunate enough to get one into the boat then thresher sharks thrash…and they thrash hard.

This is exactly what happened to Peter Feast and Jim Ewing when the 10 1/2 foot long thresher jumped into their boat. Here’s what Ewing told Australia’s 7 News:

“We have never seen anything like this before in our lives,” Ewing said. “The next thing I could see was this head and mouth coming over his [Feast’s] shoulder, and it crashed into his shoulder as it came through. It landed flat, bang on the deck of the boat between the two of us.”
“It could well have broken his neck or if it had opened its mouth it could’ve lacerated an artery,”

As noted on Grind TV, two passing fishermen saw everything go down and corroborated the story…The shark was also released:

Two fishermen nearby witnessed the entire thing and confirmed the story on the ABC South East SA’s Facebook page.
“The power that tail can generate in order for a great big shark like that to totally clear the ocean, man, there is some power in it,” Ewing told ABC.
The fishermen decided to release the shark but needed help. They motored to shore and got some assistance from a couple of guys.

I kind of love that in the modern age of technology and social media the traditional ‘fishing story’ in which people sound like they’re full of shit suddenly becomes reality. We’re now able to document all that batshit crazy stuff which happens out on the water…and crazy shit happens on the regular, just check out the BroBible ‘FISHING‘ archives to see my recent stories.