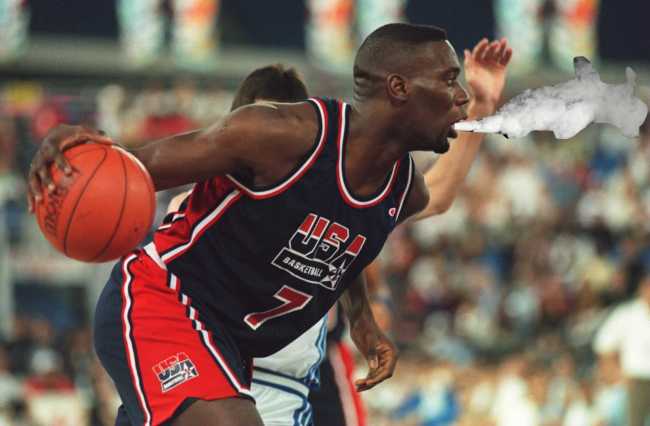 A few years ago, Jay Williams estimated that up to 80 percent of the NBA smokes the devil’s lettuce. Matt Barnes claimed that the best games of his career were medicated on jazz cabbage. Al Harrington has become a Mary Jane mogul after some Dank Sinatra alleviated the painful symptoms of his grandmother’s glaucoma.

Former athletes are now realizing that investing in car washes is a trap and the restaurant industry is one giant headache for small margins.

The answer: The Whacky Tobaccy industry, which is projected to balloon to a $73.6 billion market size by 2027.

Former NBA icon Shawn Hemp Kemp knows this, which is why he is set to open up his own dispensary in Seattle this month, becoming Seattle’s first Black-owned dispensary.

Kemp’s teammate in Seattle, Gary Payton, will be by Kemp’s side for the grand opening “green ribbon cutting ceremony” of Shawn Kemp’s Cannabis.

Give me a hit of that good Detlef Schrempf and let me stare at this wall for an hour.

“I’m looking forward to welcoming Sonics fans on a regular basis, starting with opening day,” Kemp said in a statement.

“I hope that Shawn Kemp’s Cannabis will be an inspiration for people to get involved with the legal cannabis industry, especially people of color.”

According to a 2017 report, less than one in five weed businesses nationwide are minority-owned and only 17 percent of cannabis executives were members of minorities.

This is a very appropriate transition for Shawn, who’s been getting high his entire career AYO!

Shawn Kemp had that BOUNCE pic.twitter.com/9wVXgJWoRS