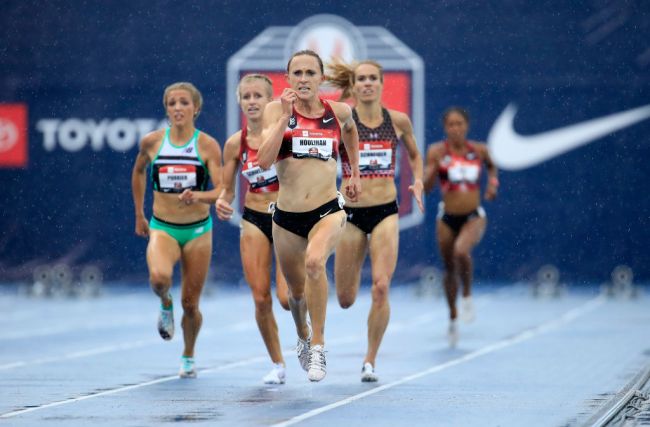 American middle distance runner and Olympic medal contender Shelby Houlihan has been banned from the sport for four years. The ruling comes exactly seven days before the start of the U.S. Olympic Track and Field Trials and will keep her out of Paris in 2024 as well.

Houlihan had not competed in 2021 and this explains why. She received a positive test for only 5 ng/mL of an anabolic steroid named nandrolone in January. It is known to increase muscle mass and is also an androgen— essentially a synthetic hormone.

The hormone regulates the development of male characteristics in vertebrates. That could be beneficial in a physical sport like track and field, especially in addition to the steroid component, which is why it is illegal.

A 12-time All-American at Arizona State, Houlihan won a national championship in the outdoor 1500 meters as a junior. She holds school records in the 800, 1500, mile and 3000 at the university.

She is six years into her professional career at 28 years old and runs the 800, 1500 and 3000 with Bowerman Track Club. After qualifying for the Summer Olympics in 2016, the 5-foot-3  finished 11th in the world in the 5000. Houlihan has only improved on that time in recent years.

She currently* holds the American record in the event as well as the 1500 and was considered a contender from the United States in the upcoming games.

That is no longer.

Houlihan and her camp maintain her innocence. They believe that the result stemmed from a pork burrito at a food truck in Beaverton, Oregon. Her test was the next day and the tortilla-encased pig caused it to pop positive.

Here is a statement from coach Jerry Schumacher:

As the story goes.

“Shelby is an innocent athlete,” Greene said. “What happened to her is entirely unjust.”

It is of note that nandrolone has a direct tie to meat. World Anti Doping Agency documents state that the consumption of pig organs can specifically lead to the presence of the substance. Hence the pork burrito.

Greene said that Houlihan received a provisional suspension of more than three months after the positive result. They chose to opt for a single hearing before the Court of Arbitration for Sport.

Getting down to business.

While awaiting trial, Greene went to work. He hired a private investigator and former W.A.D.A. scientist to help prove their case, Houlihan passed a polygraph and hair test to try and prove her innocence, and he pushed for the positive sample to be retested.

His request for it to be tested at a second lab was denied. Why? It’s unclear.

Houlihan’s team estimates that she was tested approximately 100 times since 2016 and has never failed before. She has also never missed a test.

Shelby Houlihan on the ban that'll keep her from competing at the Trials + Olympics:

"My heart is broken and I feel extremely betrayed by the sport and this whole process. I don't trust it anymore."

She says she had never heard of nandrolone before her test results came back. pic.twitter.com/yCkbbIuOVn

The Court of Arbitration hearing was held in the first week of June but it was unsuccessful. As it stands, Houlihan will miss the next two Olympics and she is devastated.

Greene is considering an appeal to the Swiss federal tribunal. There is no foreseeable timeline and her 2020 (in 2021) Olympic opportunity is no longer.

A legend in her field taken down by a pork burrito.