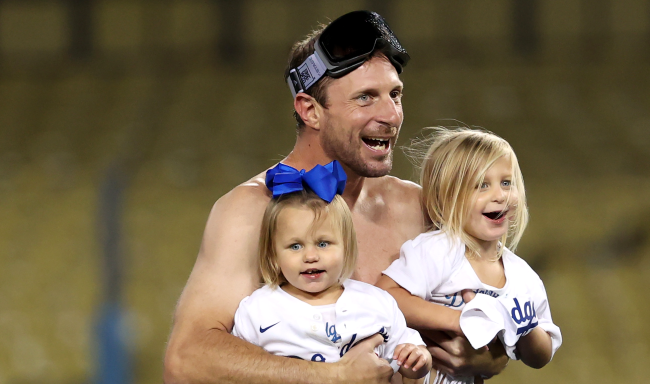 Max Scherzer went on a roller coaster of emotions Wednesday night during the Los Angeles Dodgers’ big win over the St. Louis Cardinals in the National League Wild Card game.

First, he was tasked with leading the Dodgers on the mound in the winner takes all game.

Then Max Scherzer got yanked from the game by manager Dave Roberts after less than five innings – and wasn’t very happy about it – with the game tied 1-1.

Max Scherzer did not want to come out of the game after 4 1/3 innings.

Max Scherzer and Dave Roberts after Max was removed from the game pic.twitter.com/dmJRQK0I7l

Finally, however, Max Scherzer was able to get some relief when his teammate Chris Taylor hit a dramatic walk-off two run homer in the bottom of the ninth inning, allowing the Dodgers to move on in the postseason.

Chris Taylor is the 1st player in @Dodgers history to hit a walk-off HR in a winner-take-all #postseason game. pic.twitter.com/Pik5JTdGEq

It was enough to make even someone as laser-focused as Max Scherzer lose his sh-t a little bit.

So much so, in fact, that Scherzer, looking a little worse for wear, showed up shirtless, very relieved and about as happy as we’ve ever seen him during a postgame interview he did with TBS.

The TBS studio crew was caught by surprise with the shirtless Max Scherzer interview. 😂💪⚾️ pic.twitter.com/FHCgjSd8md

When Dave Roberts reached for the ball, Max Scherzer gave him the ol’ handshake. Classic. pic.twitter.com/lEeM3ge6ED

Max Scherzer: "You gotta get rid of this echo… I'm drunk… whatever…" pic.twitter.com/lzYF2EathL

That’s just awesome. And so is this…

Max Scherzer’s kids just wanted to run the bases with daddy after the game was over. 😀 pic.twitter.com/A1hMY6tfmu

As we can see from video from inside the Dodgers’ clubhouse after the game, there’s a pretty good reason Scherzer wasn’t wearing a shirt… and was feeling a little pickled.

Max Scherzer appeared to have composed himself a little bit later for the post-game presser, and put a shirt on, but he was still a lot more jovial than most fans are typically used to seeing him.