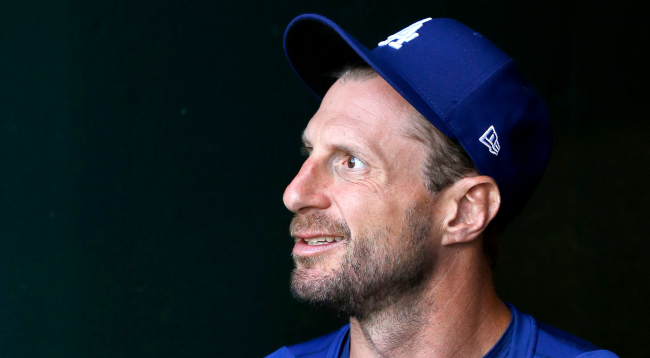 Stories abound that illustrate how incredibly intense a person new Los Angeles Dodgers pitcher Max Scherzer is. Not that anyone needs to hear those stories to know that. All a baseball fan has to do is what his face and see the crazy-eyed expressions he makes during any given game – even when he isn’t playing.

So Dodgers manager Dave Roberts, after managing against Scherzer for years, certainly knew that there were going to be some moments with his new pitching star that were going to be, umm, impassioned.

Little did Roberts know, however, that he would feel some of Max Scherzer’s wrath by simply patting him on the butt for doing a good job.

Sunday night, Roberts related a story about his experience dealing with Scherzer and his dialed up to 11 intensity during Mad Max’s very first game pitching at home for Los Angeles.

“You can’t talk to him, let alone touch him,” Roberts said, talking about when Max Scherzer is pitching.

“I remember a start against the Astros, I think maybe his first start at home for us, and… pat him on the butt coming into the dugout, first inning, second inning… maybe the third inning or the fourth inning I pat him on the butt, like, ‘hey, nice going,’ and he mumbles something under his breath, and I’m like, ‘did he just say, “don’t effing touch me?”‘

“And then I got the scoop from our players like, ‘hey doc, make sure you don’t touch him, he doesn’t want anyone to touch him,’ and then so, uh, I go after the game, he goes seven, and I go, ‘hey man, did you just mumble something like “don’t effing touch me?”‘ And he goes, ‘yeah, and I gave you the tempered most respectful way I could say it because this is my job, I don’t need any kind of congratulations or support, that’s my job.'”

Watching ESPN on mute made me miss the Dave Roberts story about Max Scherzer. pic.twitter.com/gfJ6cOJPfb

Makes sense. After all, Max Scherzer is the same guy who after fouling a ball off his face in batting practice then went out and threw 7 shutout innings, striking out 10, in a 2-0 win over the Phillies in 2019.