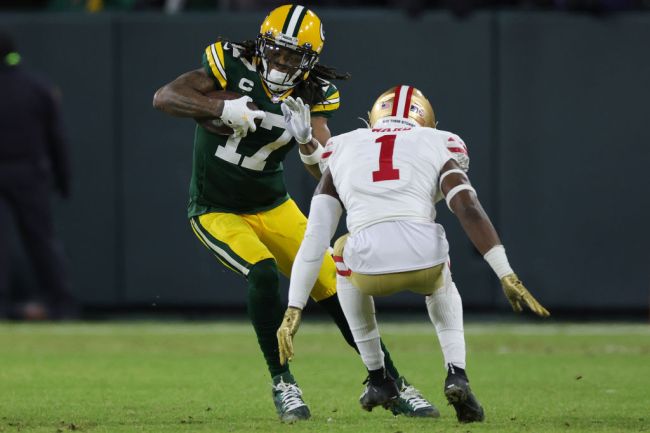 Today’s Aaron Rodgers appearance on the Pat McAfee show came and went without an announcement about his future. However, that hasn’t left us without some news that could have a huge impact on Rodgers’ future.

It turns out, those negotiations have gone absolutely nowhere. According to Tom Silverstein of the Milwaukee Journal Sentinal, the Packers and Adams haven’t actually had contract discussions since the season ended.

If QB Aaron Rodgers is waiting for a Davante Adams deal to get done before making a decision, he'll be waiting a bit. There have been no discussions between the #Packers and Adams since the season ended, a source said. Team has until March 8 to decide whether to use franchise tag

This news is particularly surprising today, as this is the first day that organizations can franchise tag players. Adams has been one of the biggest names expected to get hit with the franchise tag this offseason.

It also raises questions about where the Packers are at in their efforts to bring back Aaron Rodgers. It seems very unlikely that Rodgers returns to the Packers without knowing that Davante Adams will be returning as well.

Regardless of what happens with Aaron Rodgers, letting Adams walk would be a huge mistake for the Packers. He is arguably the best receiver in football and is the only reliable receiving option the Packers have.

If the Packers don’t hang on to Davante Adams this offseason, Aaron Rodgers will likely be following him out the door and the Packers will quickly go from Super Bowl contender to a complete rebuild.